Do the Infinity Gems spell out Thanos?

A common theory surrounding the Infinity Stones is, that the first letter of the form they are found in combines to spell out the name Thanos. The images below show the theory in action, including a guess at where we might eventually see the Soul Gem (the only Infinity Stone not yet found as of Doctor Strange). 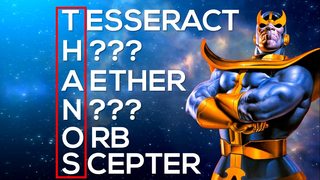 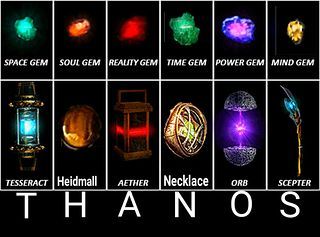 Is there any truth in this fan speculation, or is it just a coincidence?

No, that's absolutely not true.

Even before Doctor Strange came out, this was unlikely to be true. See, for example, Thaddeus's excellent response to the same question on our sister site (with a lot of information pulled from the comics source material).

The big problem with the theory is that it requires you to start by assuming it's true, then work backward to pick names that fit. It's already on sketchy ground with the unnamed staff Loki has (why is that 's' and not 'l'? Because there's no 'l' in THANOS), and the orb from Guardians of the Galaxy. People then took this a step further to try and "guess" what 'n' and 'h' would be, and it got kinda silly.

But we now know where the Time Gem is. It's in the Eye of Agamatto. There is no 'e' in THANOS, and the 'a' is already covered by the Aether. There's no reasonable way to fit the Eye of Agamotto into this theory.

It was just a coincidence.

With the release of Infinity War, we can now definitively conclude that the theory was false.

The Soul Stone was

on the planet Vormir. It wasn't inside any artifact, nor was it associated with anything beginning with the letter "H".

So even if, at a stretch, you can say the N stands for Necklace, there is no reasonable way to make the Soul Stone fit the letter H. So it really was just coincidence.

13
What is the current position of all Infinity stones in the Marvel Cinematic Universe?

24
Why do anime “spell everything out” for the audience?
66
Why does Thanos need *all* the infinity stones?
5
Why did Doctor Strange say that his job is “protecting the reality” to Iron man?
47
How did Thanos know about the power of “The Snap”?
20
How could they return the Infinity Stones in their “raw” form?
3
Why didn't Doctor Strange use the Time Stone on Thanos?
21
Why was Endgame Thanos so different than Infinity War Thanos?
9
Why didn't Nebula warn them about Thanos?
0
Why didn't an Asgardian go to Earth sooner?