But here in the poster, it shows Hayley Stark standing in a trap instead of Jeff Kohlver: 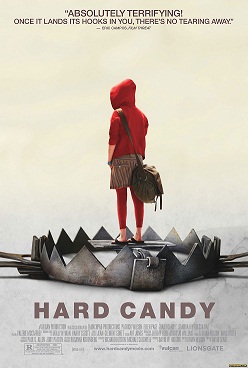 She not exactly caught in the trap...she's there to attract a predator to catch him in the trap.

The film opens with a sexually charged, flirtatious online chat between 14-year-old Hayley Stark and Jeff Kohlver, a photographer in his mid-30s. Jeff and Hayley meet at a coffeehouse, and he takes her back to his apartment. Hayley makes them both screwdrivers and asks him to take photographs. Before he can, Jeff gets dizzy, his vision blurs, and he falls to the floor unconscious.

Hayley explains she has been tracking him and drugged him because she knows he is a pedophile, child rapist, and murderer.

Basically, she's using herself as bait in the trap. 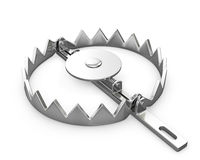 Not the answer you're looking for? Browse other questions tagged analysis posters hard-candy .

8
Were the direct references to Die Hard and Under Siege made on purpose?
9
How is “Bonnie and Clyde” dated?
2
Was it standard for studios to design/print posters for short films?
9
Why was the episode “The Mountain of Youth” almost lost?
3
Why was the original tagline changed from the movie poster?
5
Why did the Wachowskis change the story's themes so significantly?
13
Why did they name the show Russian Doll?
41
Was there a Die Hard movie poster that excluded Bruce Willis?