How did they shoot the hostess scene?

I think this is one of the most iconic scenes of the movie 2001: a space odyssey:

How did Kubrick shoot it?

They used what most people refer to as a "giant centrifuge". There are multiple sites on the interwebs which explain this.

The giant centrifuge was built “in the North of England” by Vickers Aircraft and was “about 50 tons and 60 to 70 feet high,” (in actuality, 30 tons). In this shot, the centrifuge wheel does turn, but once the stewardess steps forward and begins walking up, it is the camera—on an axis—turning.

Here is a picture from the Wikipedia page: 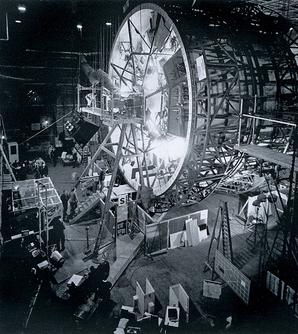 Note that although this set was often referred to as a centrifuge, it never spun fast enough to create centrifugal force; it (and the camera) only turned fast enough to let the actors walk/jog around at the bottom while the set rotated around them.

For the scene where Bowman was jogging, and Poole seated at a console, Poole (Gary Lockwood) was actually strapped into his seat so that he could rotate past Bowman (Keir Dullea) who was effectively jogging in place.

Not the answer you're looking for? Browse other questions tagged film-techniques 2001-a-space-odyssey .