How does that private prison in The Flash work?

I'm currently watching The Flash season 1 episode 12 and they keep throwing people in this private prison they built.

I wonder how this fits into the show. I can't really explain what bugs me with this private prison concept but it simply doesn't feel right to me.

Barry is such a lawful and morale person; why isn't he concerned when they put people into an estimated 1m² big cell without anything in it.

It feels like this is psychological torture to me. How do the inmates even get food or visit the bathroom?

I really like the show so far but this really starts to bug me a lot.

Barry, while moral, is a super powered vigilante out of a sense of moral duty (With Great Power comes some thing something, to misquote that other franchise). He has grown up victimized by a super powered villain, giving him a complex about what's right, not necessarily what's legal. When he first puts someone in the particle accelerator, it's out of pure necessity. Where else will they put someone with super powers? Regular jail won't hold them, as you can see throughout the season:

Multiple break in and break outs happen at Iron Heights, by The Reverse Flash, by the teleporting girl, and by non supers with super weapons like Snart and Heatwave.

They constantly mention how bad of an idea the jail is, and when Detective West finds out, he calls Barry out on it, his captain bluntly calls it a human rights violation, they compare Barry to that green guy with an anger problem that shoots people with arrows and has a private prison island. Eventually they try to transfer the evil metas to said prison with the help of the black ops government group Argus but Barry is foiled by his own petards and they all escape.

Eventually, the Star Labs scoobies provide the civilian police the technology to suppress meta powers at Iron Heights, once the police publicly acknowledge Metas existence and form the Meta Human Task Group. Which allows the heroes to regain the moral high ground.

As to eating, we see them bring some of the prisoners fast food in season 2. The bathroom is not discussed, as per normal on tv and movies, but there was a Twitter or Tumblr post saying that Cisco also built a head into the prison cells.

How does that private prison in The Flash work?

It works like any other prison except we skip the judge/jury stuff. It is illegal if it is taken to court but unethical? I don't think so.

Barry is such a lawful and moral person; why isn't he concerned when they put people into an estimated 1m² big cell without anything in it?

So should he leave mass murderers with superpowers in loose?

Also, he did save all the prisoners when Eobard Thawne was reactivating the particle escalator and planned to move them to Lian Yu.

Also they did help Iron Heights Prison to build a meta-human wing and stopped using pipeline or only used it for temporary purposes.

How do the inmates even get food or visit the bathroom?

Prison does have toilets inbuilt as shown in Elseworlds, Part 1. Also, they do feed them.

From cinemablend from a deleted scene from the episode, Grodd Lives:

It looks like The Flash team is extremely accommodating to the baddies that they take down, even giving them various options concerning where they get their takeout. Caitlin totally confirms this later in the clip when she announces some of the prisoner’s eating habits, including the fact that Deathbolt is vegan, which totally fits.

"On the other hand, I now know all the dietary habits of our metahuman inmates. Did you know that the Weather Wizard orders Thai food every day? And that Peekabo loves enchiladas, and Deathbolt is vegan?" 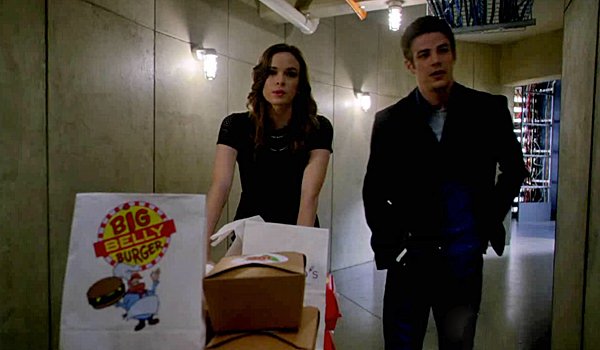 The jails are not equipped to handle people with the powers metahumans have. In Season 2,

As to the question of eating or bathroom facilities, they have never explained how any of that works. Perhaps the field that suppresses powers also suppresses bodily functions. ;-)

3
How does the Flash have powers on Arrow S04E19?
1
In the first season finale of the Flash, how did they know their plan would work the way it did?
6
Why Does the Reverse Flash Vibrate?
2
What does this line in The Flash Season 4 Episode 18 mean?
10
Why was Flash affected by the prison pudding in Season 4?
3
How can Flash turn around return from the blackhole?