Is there any connection between Liz and Ron’s office food pictures?

In 30 Rock, Liz Lemon has a picture of a plate of food in her office: 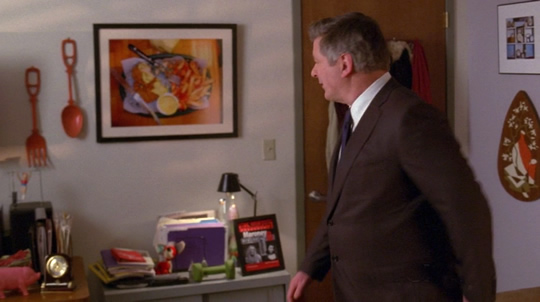 In Parks and Recreation, Ron Swanson also has a picture of a plate of food in his office: 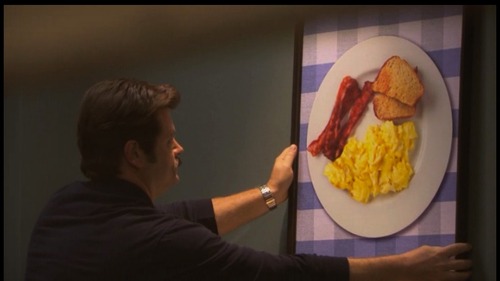 Is there any out-of-universe connection between these two vaguely similar set-dressing choices?

I know Tina Fey (creator and star of 30 Rock) and Amy Poehler (star and producer of Parks and Rec) worked together on Saturday Night Live — are food pictures a reference to something from there? Or are such pictures pretty common decoration in American offices? Or is it just a coincidence?

Ron and Liz are both cartoonishly passionate about food. Liz's relationship with food is a primary character trait. As goofy as 30 Rock is, it's striking how consistently Liz uses food as a defense or avoidance mechanism when faced with uncomfortable (usually romantic) issues. In season 2, episode 8 "Secrets and Lies," Jack tries to talk to Liz about his personal life:

JACK: That woman you met this morning in my office is not a colleague of mine. We are lovers.

LIZ: Oh, that word bums me out unless it's between the words 'meat' and 'pizza.'

See also season 2, episode 14, "Sandwich Day," in which much of the action (including a cutaway gag with Tina Fey's immortal reading of the line "Where's my mac and cheese?") is driven by Liz's desperate, sometimes violent obsession with food.

Ron's love for food, especially breakfast food, is a little more low-key, but still a well-established part of his character. In this clip from season 2, episode 8, "Ron and Tammy," he talks about a different poster of breakfast food that occupied:

I'm a simple man. I like pretty, dark-haired women and breakfast food. But this stock photo I bought at a framing store isn't real. Today I got the real thing. A naked Tammy made me breakfast this morning. I should have taken a picture of it.

I apologize if I'm explaining the obvious, but it is not normal at all to hang up a stock photo of a woman you've never met in your office. (For the record, the picture of eggs, bacon, and toast would still be a bizarre office decoration in the real world. Liz's poster is a little more artistic, but still weird. Maybe less weird for a comedy writer's office.) But Ron is not a normal guy—we are led to believe that, if he had thought to take a picture of Tammy preparing breakfast in the nude, he would consider hanging that in his office.

All this is fairly clear from casually viewing the shows in question. The point of establishing the above in such excruciating detail is this: Both Liz's and Ron's food posters are well-motivated on their own. If you have a goofy character with a cartoonish enthusiasm for food, and that character has an office that you need to decorate, it makes sense to put a poster of food in that office. It establishes right away what that character's deal is. I can't prove that the creators of 30 Rock and Parks and Recreation never had a conversation where they both decided to put food posters in their shows, but there's no need to come up with an explanation for these posters beyond what's established in the text.

(Still, we might ask whether there's a connection between those motivations. Liz, the central character of 30 Rock, is obsessed with food. Ron, a central character of Parks and Recreation, a show airing at roughly the same time on the same network, is obsessed with food too. Could both characters be based on the same person? Maybe someone at NBC? But even this apparent connection has a more likely (if less intriguing) explanation: The love of food is universal, and therefore funny.)

There are no doubt a number of crossover similarities between the two shows. Some of them are outlined here.

Obviously, both of them worked on SNL at the same time and this no doubt led to the similarities between the two shows. Not sure specifically about the food posters, but if I were to guess, it is probably not a coincidence.

Not the answer you're looking for? Browse other questions tagged 30-rock parks-and-recreation .