Does the Iron Man movie ever establish a convincing motive for the main villain?

It is revealed during the Iron Man movie that Obadiah Stane 'ordered a hit' on Tony Stark. This led to the attempt on Stark's life at the opening of the film.

Does the movie at any point establish a convincing motive for Obadiah to do this?

In the montage of newspaper headings and front pages that we see near the start of the movie, we learn that after the death of Howard Stark, Obadiah Stane was given control of Stark Industries until Tony Stark was old enough to run the company. 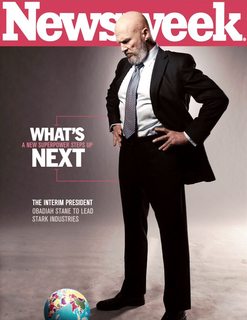 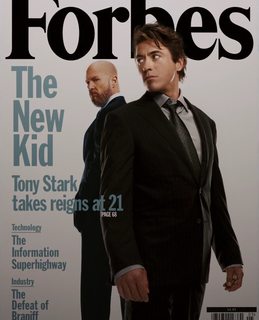 The reason I have included these images in this answer is that they actually tell us a lot about Obadiah Stane. In the first, when made President of Stark Industries, he is bigger than the world itself; in the second, when Tony takes over, he's pushed to the background again.

From this, we can see that Obadiah enjoyed being in control of Stark Industries, and did not like having that taken from him by Tony. As such, the plan to kill Tony was there so that he could be reinstated as the President of Stark Industries.

Supporting this is a line of dialog shouted by Obadiah in the final fight scene;

"For thirty years, I've been holding you up! I built this company up from nothing! Nothing's gonna stand in my way - least of all, you!"

It's also worth noting that when his plan to kill Tony failed, Obadiah tried to have Tony legally removed from his position with the company.

After Tony shut down the weapons division of Stark Industries, Obadiah tells Tony to lay low so that he can convince the companies board of directors that Tony is still fit to run the company. However, we later learn that it was Obadiah who filed the injunction to remove Tony from his post in the first place.

As such, we can see that Obadiah's ultimate goal here is to simply remove Tony Stark from the company so that he can take control once more.

Not the answer you're looking for? Browse other questions tagged character marvel-cinematic-universe iron-man .

47
In Iron Man, why is Tony Stark fooled for so long?
3
Can JARVIS be for real?
15
How did the bad guy actually die in Iron Man 3?
13
Where was the Hulk during the events of Iron Man 3?
5
How did Iron Man record his past days?
5
Was the Iron Man video phone technology ever used in real life?
6
Why is Tony Stark so arrogant in the MCU?
11
Why doesn't Tony Stark get hurt by the inside of his Iron Man suit?
0
Why does removing Tony Stark's power source weaken him?