Is the orange coat guy getting killed a reference to South Park's Kenny?

In an early scene of the movie Chappie (2015) there's this part in which a guy gets shot. It's noticeable that this is the first, and perhaps only, person that gets killed. As he falls down it's very visible that he's using an orange coat with a hood. The resemblance with Kenny made the scene so much funnier. Was this intended as an explicit reference?

There are also references to Mr. Hankey and Cartman toys, from South Park, that appear in the background. Were these references made explicit by the makers, or by some of the participants of the movie (perhaps actors, or even branding)?

Since there's at least one explicit reference in Chappie to South Park it's well worth trying to make a connection. Even though the following does not address the Kenny reference it does give general background for a comparison that sums up to a thematic link.

The writer-director of the movie stated that the movie is about the soul, and what consciousness is, and how animals and children grow pure, with innocence, and are later influenced by the world in a harsher way: "the world jades them, and turns them into something else". So Chappie (as an infant animal or human) is cute, and represents what is good.

The representation that childhood is innocent is many times shown in the South Park show. This is not to be taken in a absolute way, children can also be cruel. In one episode, AWESOM-O [s08e05], Cartman uses a robot costume to make fun of Butters: in this sense there's a bit of evil vs good. But as long as the naive blond doesn't realize the darkness of the rivalry he just chants happily my robot friend! 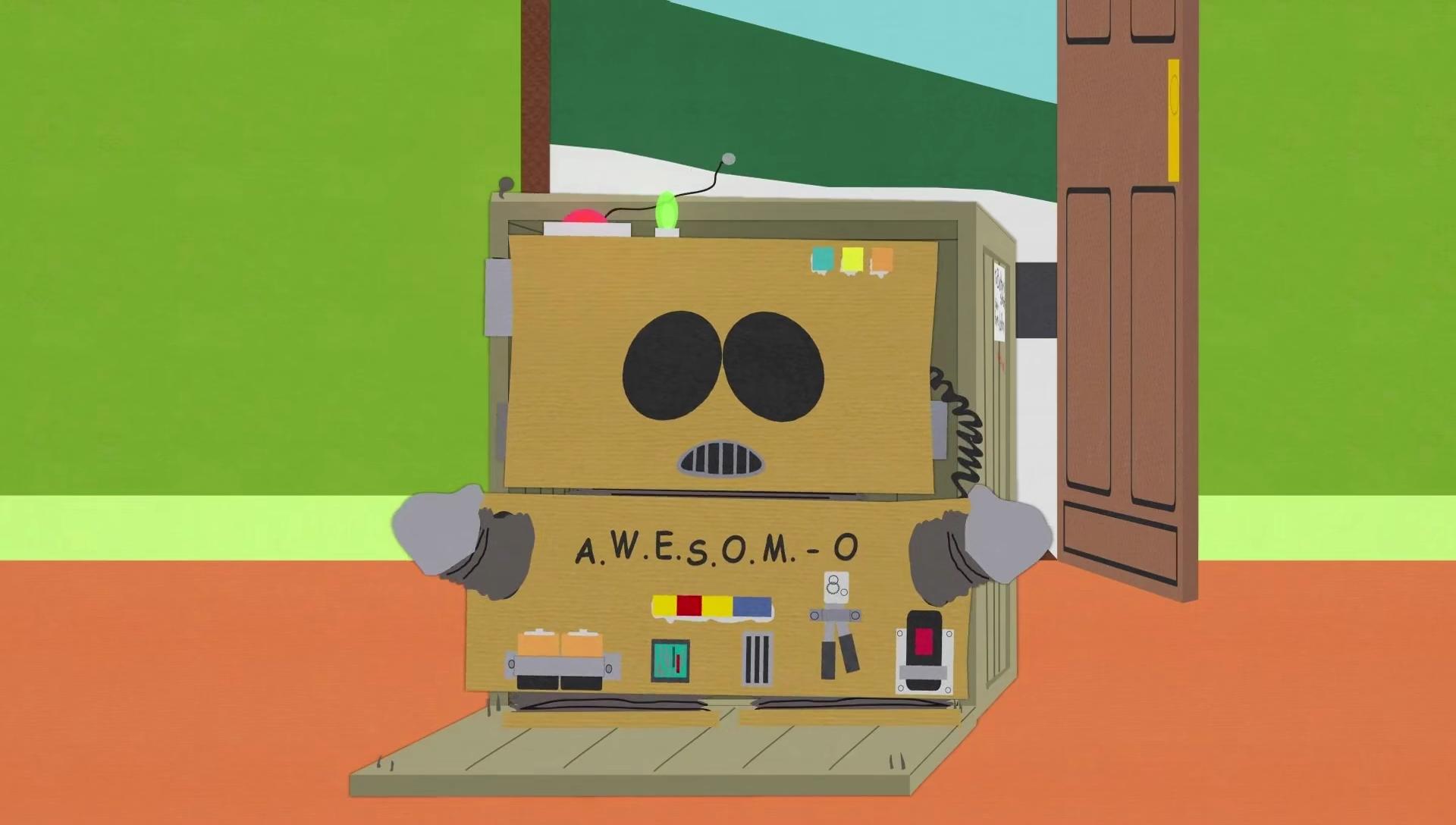 The connection between the themes of both videos, the movie and this episode, is perhaps slightly generic up to here. But the discussion in the movie may also suggest about the potentialities that underlie in IA, in humans, and in the grey area that makes them indistinguishable. You can think that IA is only something to be afraid of, or have only silly ideas, or no ideas at all.

On one hand, Sigourney Weaver states that it's a pity that her character can't see a possible profit for everything that Chappie could be capable of. On the other hand, in South Park regular people realize that the robot is fake and a boy is behind it all. But later, when at a trip to Hollywood, some movie producers find AWESOME-O and think that the best idea would be to make him/it, as a robot, write ideas for movies. (Spoiler on radical kindness: Butter uses profit of Cartman's ideas for movies scripts and sends the money to needy kids in third world countries!). (Spoiler #2: Later on, the stupidity of the military is paramount. Cartman says that he's alive and they just think that the robot has developed consciousness, and doesn't know it's a robot.)

IA is yet to be explored. What is the relationship between the soul and digital information? A helmet may, in fiction, transmit consciousness to a microchip, or even a usb pen drive. And maybe human and IA can become friends or even mimetize.

Additional note on South Park: Are Robots and Automatrons the same thing? Non-automation is actually the distinctive feature of IA. The latter just performs standarized actions. Real IA learns and has the ability to do new things.

Not the answer you're looking for? Browse other questions tagged reference south-park chappie .

8
Why is the choir in South Park episode 301 called “Getting Gay With Kids”?