Is there a certain comedian this South Park episode is referencing?

In episode season 20, "Douche and a Danish", Mr. Garrison talks in a manner similar to stand up comedy instead of holding a speech. 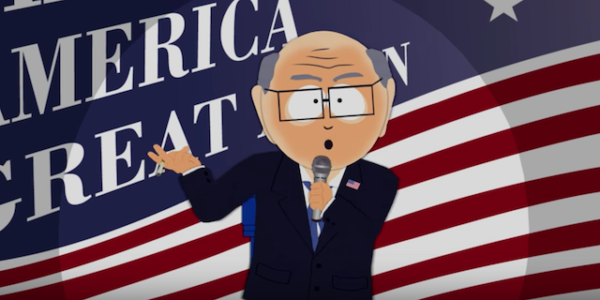 Is this a reference to a certain comedian or just a generic reference?

The cigarette he waves around, the crass misogynistic humor and intentionally insulting his audience until they leave the theater is all Andrew Dice Clay (only instead of the greaser look and NY accent, it's Mr. Garrison's voice in Trump's suit). That was pretty much Clay's schtick until his career faded somewhere around the mid-late 90s. That style is evident in his album The Day the Laughter Died.

The album is largely improvisational, with Clay interacting with the audience over the course of over an hour and a half. The topics run through his usual gamut of sex, relationships between men and women, masculinity, religion and popular culture. Unlike his prior recordings, the jokes are delivered intentionally flat and raw as to offend and alienate the audience, turning the performance into the joke itself. Clay's performance results in several members of the audience leaving the show early, some insulting him as they leave.

IGN and the AV Club concur that it's Clay-like. Here's some of Clay's act (Warning: Profane):

The part where Mr. Garrison says:

So you've been ok with fuck everyone to death, all the muslims and mexican shit but fingers in the ass did it for ya? Just wanted to see where your line was.

is very reminiscent of a bit from Jim Jefferies' Alcoholocaust (starts at 06:25), where he says:

Now, when I started this show my first routine was about how lesbians were fat, ugly, useless, with no sense of humour, and you couldn’t applaud more. Then I killed an Arab man from a f—ing helicopter. Just shot him dead. Then I said… that Christians are bullshit and there is no god. And that’s the moment that half the audience chose to be offended. Was that the f—ing moment that got you?

Not the answer you're looking for? Browse other questions tagged reference south-park .

16
South Park and references to Muhammad
8
Why is the choir in South Park episode 301 called “Getting Gay With Kids”?
6
The Departed reference in How I Met Your Mother
2
Why did the South Park movie make fun of Mahatma Gandhi?
9
Member Berries in South Park
4
Travel between South Park and Canada
33
Do you have to be well versed in Mighty Mouse to understand Andy Kaufman's infamous SNL skit?
7
Is this scene in Luke Cage a Godfather homage/reference?
5
What is the phrase “Paramedics, come on down!” in Family Guy referencing