Why does the map show a specific starting point and route? 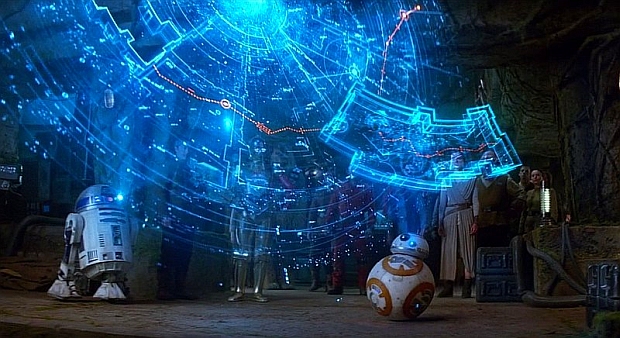 At the end of Star Wars: The Force Awakens BB-8 completes R2-D2's map to finally reveal the planet Luke Skywalker is on.

But instead of the usual "X marks the spot" to indicate a location on a map, we can see a route with a starting point. And since the route is not a straight line I'm wondering if one has to follow this specific travel path to get to Luke.

It's likely that it is the hyperlane that allowed Luke to safely get to the planet where we find him at the end of Force Awakens.

"Hyperlanes were routes through space in which a spaceship could safely travel without colliding with a body in space, or some other phenomenon such as a black hole.1 There were five major routes in the galaxy, with hundreds of secondary routes and thousands of minor ones. Scouting new hyperspace routes was an incredibly dangerous task for an explorer.

In many parts of the galaxy hyperlanes also involved periodic re-entry into realspace. This was so as to manually maneuver the ship towards the next hyper-point." -Wookieepedia

"Hyperspace routes—also called hyperspace lanes—were an established path through hyperspace, which linked major worlds, just as roads linked major cities on populated worlds. Those routes were regarded as safe, allowing starships to travel without colliding with a body in space." -Wookieepedia

Supporting this idea, a CinemaBlend piece (Star Wars: The Force Awakens' Mysterious Map And What It Might Really Mean) speculates that it is a map, started by Darth Vader, to a Jedi Temple which Luke travelled to, to learn more about the Jedi and to defend the temple.

"Whatever was left of the Empire after The Return of the Jedi was dust by this point, so how did they get any of the map? We think it's because they already had it. But for a different reason than "finding" the missing Luke Skywalker. Let's piece this together." -CinemaBlend

Travel in Star Wars can only really be done through charted routes. Blindly jumping into hyperspace in any given direction can lead to fatal ship on space rock kisses of death or being pulled into an unknown gravity well to a spectacular explosion or worse, spaghettifying in a black hole for eternity. Mapping new hyperspace routes is a dangerous but profitable profession. You don't just point at a star and go thataway.

The point of the map route is a safe passage to the specified point in space.

This is basically related to Solo's Kessel Run. He took a more direct, dangerous route, instead of a longer, safer route.

It's possible it could be a hidden hyperspace route that only Luke knew about (either because he discovered it or because it was a guarded Jedi secret he found). This could explain why they needed a map instead of just a set of coordinates to get to him. It could also explain how no one was able to find him.

Not the answer you're looking for? Browse other questions tagged analysis star-wars the-force-awakens .

25
Why does Frank peel off the labels from bottles and things?
4
What was the point of the interplay between Richard Riddick and Dahl in Riddick?
7
Why does the First Order in “The Force Awakens” refer to the Resistance as “Rebels” when the Republic is reinstated?
12
Why does The Force Awakens not use the Episode notation?
43
Why does "The Force Awakens" use an image language associated with national socialism for the First Order?
10
Does 12 Angry Men point to the bad jury selection system of the US at the time?
24
Why does the First Order essentially just make a bigger Death Star?
11
Does the title of True Detective have any meaning within the show?
12
Why would Luke give away this piece of information?