Why is the insignia of House-of-El different in Superman's suit from that in Supergirl's suit?

In Supergirl s2 e1 named The Adventures of Supergirl, Superman gets introduced.

But it can be easily noticed that the insignia of House-of-El that is the iconic S symbol is different in Superman's suit than from that in Kara aka Supergirl's suit.

Specifically, the background of the insignia is glaring golden-yellow in Superman's suit while it is absent in Supergirl's suit. 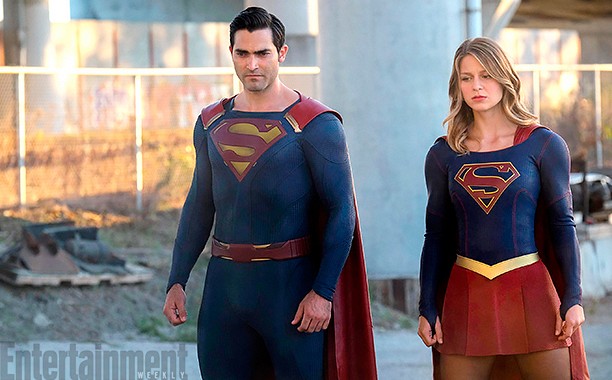 Now, as we all know the symbol typically comes with the yellow background in the comics.

But why is the insignia different here in Supergirl's suit? Why is the background not yellow in her suit?

Is there any reasonable explanation behind this or am I being too pedantic? Or am I missing something?

I know her suit was inspired from that of Cavill which also lacks the distinct bright yellow background but still the yellow color does appear in the insignia of his suit.

Is there a Superverse explanation?

arrowverse supergirl
Share
Improve this question
edited May 22 '17 at 10:17

Age difference. Either the symbol is different for children than it is for adults, and Clark has been using the child one because he doesn't know, or because Kara was already a teen/young adult and is using an older version of the crest. Clark was born later, hence a newer one.

Or as Dave mentions, they are of the House of El, but not of the same family. They are cousins of some relation. In real life heraldry, different branches of a house have similar but different symbols. Even fictional heraldry, specifically everyone in Game of Thrones.

Or because of personal taste, of Clark and Kara or the people who design their outfits. Not only are the symbols different, everything is. The texture and material, the Cape attachment, the colors, the belts, etc. Kara has wristlets/thumb holes!

And if the show is anything like the comics, both regularly update their outfit, both looks and technology wise. Better or stronger material. As one outfit gets damaged they get new ones that look similar but different. Look at Flash or Green Arrow, three, four outfits in as many years. (out of universe to keep audiences interested). Clark has been in the superhero game for years, and likely isn't on his first design.

Of course, out of universe, it's because the production wants to make sure the audience differentiates between the two, and not consider Supergirl a genderswapped clone of Superman. The same reason they didn't show Clark on screen for season 1. https://movies.stackexchange.com/a/55119/23541 Having identical outfits (skirt not withstanding) would hurt that goal.

8
Why does the Supergirl TV series go out of its way to not say "Superman"?