Meaning of the Silence of the Lambs poster

I watched The Silence of the Lambs a couple of years ago. Yesterday I saw its poster online. It has a girl (which I am thinking is Clarice Starling, if I am not wrong) and a moth (or maybe a butterfly) on her mouth. I am just wondering, what does it mean? How is it related to the movie? 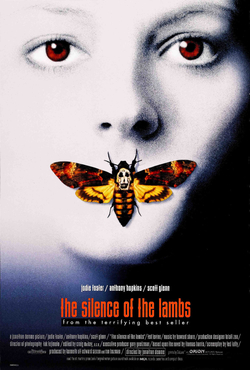 This award-winning poster art conveys many of the movie's themes and plot points:

[*] [As a point of interest: Before the plot starts in both book and movie, Buffalo Bill as a serial killer (since he's responsible for other, unrelated murders) had already kidnapped 5 women, skinned them and dumped their naked bodies in rivers. Later on, Starling would attend the autopsy of his 6th victim, and eventually save Catherine - which would've been Bill's 7th victim.]

Not the answer you're looking for? Browse other questions tagged the-silence-of-the-lambs posters .

48
What did the title of Silence of the Lambs refer to?