What was the first full-length film that was a musical?

What was the first full-length film that was a musical? I presume it would have to be after talkies became a thing.

As mentioned on Wikipedia, it is The Jazz Singer.

The Jazz Singer is a 1927 American musical film. The first feature-length motion picture with synchronized dialogue sequences, its release heralded the commercial ascendance of the "talkies" and the decline of the silent film era. Directed by Alan Crosland and produced by Warner Bros. with its Vitaphone sound-on-disc system, the film, featuring six songs performed by Al Jolson, is based on a play of the same name by Samson Raphaelson, adapted from one of his short stories "The Day of Atonement". 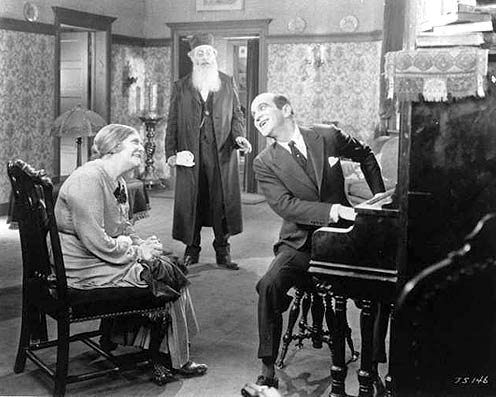 THE JAZZ SINGER (1927) was intended to be a silent film that would showcase the Al Jolson musical numbers and otherwise would have a recorded musical accompaniment. Al Jolson ad-libbed some unscripted lines like "You ain't heard nothing yet!", which made the film a sensation. There had been talking short films before using the Vitaphone disk system (usually musical shorts) and the Fox Movietone sound-on-film system (usually newsreels).

Warner Brothers released another part-talkie musical with Jolson titled THE SINGING FOOL in 1928. The first all-talking feature musical that was released was M-G-M's THE BROADWAY MELODY (1929), which won the Academy Award for the best film of 1929.

Not the answer you're looking for? Browse other questions tagged cinema-history musical .