What is that famous diner from When Harry Met Sally? 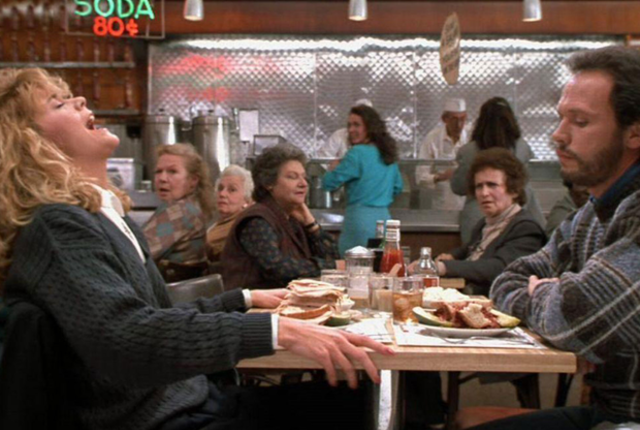 I've seen movies that take it to another level by doing scenes in real restaurants.

But I was wondering where this scene took place in. It doesn't look like a movie set. So I'm assuming it happened in a real diner. What is the name of this place. And where is it located?

People Magazine did an article on it, as well as the NY Times.

It's curious how the single best line in Nora Ephron's script for When Harry Met Sally..., released July 14, 1989, is spoken by neither Harry nor Sally. Instead, it's an unnamed character who reacts to Sally's fake orgasm in Katz's Deli with, "I'll have what she's having."

I've also eaten there numerous times, so I speak from personal knowledge. (Just about any New Yorker can validate this.)

Not the answer you're looking for? Browse other questions tagged film-location when-harry-met-sally .

6
When did movies first start to show real world from inside a car?
7
What's the point of the old people's interviews in When Harry Met Sally
12
Is the Los Pollos Hermanos eatery a real place or a movie set?
1
What movie are Harry and Sally watching?
2
How do film producers and crews film movies based on entire or just a proportion of towns and cities (real cities and towns)?
14
Has there ever been a live-action movie that takes place entirely underwater?
3
What New York building does Spider-Man glide through in Far From Home?