Why is Benson a gumball machine in Regular Show?

Most of the main characters on the Regular Show are organic, anthropomorphized, animal-like creatures. And then there's Benson; the humanoid gumball machine. I don't get it. Why is he a gumball machine? Why does a gumball machine have arms and legs and become more than an inanimate object? 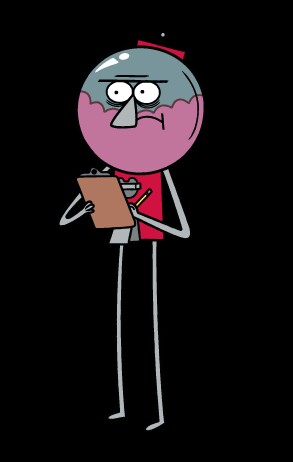 There was never an explanation in the show as far I can remember, but the creater (J.G. Quintel) of the regular show had already played around with the idea of a humanoid gumball machine before. In his student film 2 in the AM PM there are two characters that take drug laced candy which turns them into Benson and Mordecai, characters we know from Regular Show.

I don't think there is currently a reason as to why Benson is a gumball machine, it's just the cartoon world, everything is possible. It's more likely that Quintel is paying homage to his earlier work, but until he speaks out about this, we won't know for sure.

2
Where did Thanos go at the end of the movie?

7
Why was Tyra so worried about college in season 1?
24
Why does Robert Angier not use a double for "The Real Transported Man"?
7
Don Draper's Past With Bert Cooper
3
Why do the crew in Timeless worry about tracking quickly and recharge times etc?
10
Is there a scene where Charles Townsend's face can be seen?
5
Why is it so much worse for Offred this time?
5
Is Benson in a simulation?