Do we ever get to know Jake's (Elliot's boyfriend) "wildest fantasy"?

This is in reference to the Scrubs' episode My Day at the Races.

Even at the end of the episode J.D. asks Elliot about Jake's fantasy but Elliot never tells.

I don't remember any reference to that incident in the later part of the series.

So what was Jake's wildest fantasy? Was there any comment on that from someone related to the show? Or was it just meant to be left for our imagination?

So Bill Lawrence himself commented on Twitter that they never thought it up and was left for viewers' imaginations. 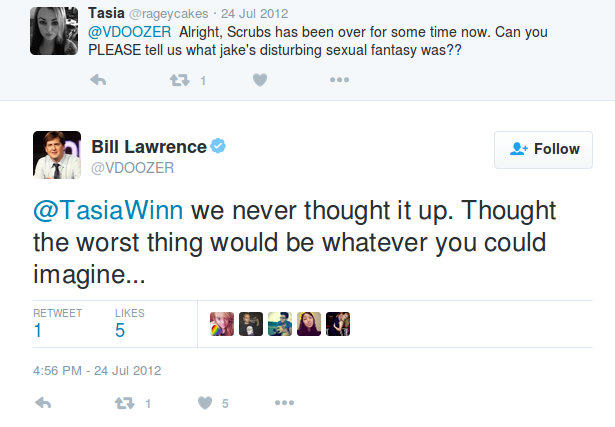 No. It was never spoken on screen. All we know is that Elliot was really disgusted by it. And Jake likely knew it was something to be ashamed of based on his reaction too.

But the truth is that had they told us, it probably wouldn't live up to the reaction. The mystery is part of the joke. Nothing the writers could come up with would be as shocking as keeping it hidden.

It's a common trope, used in all types of situations, but often sexually suggestive ones. Tv Tropes calls it the Silent Whisper (as opposed to a Stage Whisper, where the audience is included in the whisper).

It is never discussed again or revealed within the continuity of the show. There are several spots on the internet (sorry, no links, they all seem to use NSFW language) where people share theories. My own feeling is it was something most people would consider pretty vanilla or maybe a mild kink, but Elliot's repression and her hidden (lack of) feelings toward Jake made her react that way.

Not the answer you're looking for? Browse other questions tagged character scrubs .

1
Did Susie Greene's pregnancy ever get resolved?