At the beginning of the film, the Fifth Element was presented as something placed in a casket (sarcophagus). Later they re-created it out of remains (hand) of deceased non-earthling. What was the nature of the Fifth Element originally and why does it later have human "form" - Leeloo?

I believe that Leeloo / The Fifth Element is in human form throughout the entire movie. She is an engineered being designed as a weapon to fight the ultimate evil. (Its entirely a different question to ask why the weapon is in human form in the first place)

I believe the story line is that in 1914 Egypt, the Mondoshawans (the aliens in the large suits) anticipating the events of the first world war take The Fifth Element from the temple into safekeeping off earth. She is being 'stored' because the evil only returns every 5,000 years. The sarcophagus is meant to be some sort of suspended animation for her.

When evil returns, the Mondoshawans are in the process of returning Leeloo to the temple to allow her to defeat it when they are ambushed and crash. You don't specifically see her in the ship but I think we're meant to presume that she is still in the sarcophagus.

You are assuming that when she is recreated it is from the hand of a non-human species. I think this is incorrect, I believe the hand we see is meant to be a suit (spacesuit or armor). The hand is the only part of her that survives crash, and they recreate her from the remaining (multi-stranded) DNA in the remains - but it is back to her human form, not that she changes from another form. 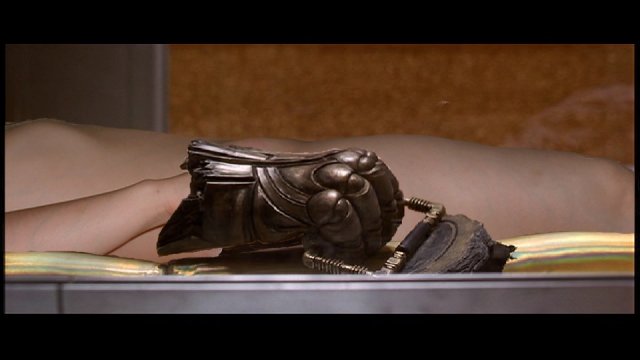 Not the answer you're looking for? Browse other questions tagged the-fifth-element .