I could extend the question to a few other ships featured on the show where you don't see them from enough angles to get a clear sense of their true shapes. I often wonder how faithful the CGI render of the Romulan "bird of prey" in TOS "Balance of Terror" re-release is to the original effects model.

The two big exceptions to my question are the Enterprise and the Klingon battle cruiser. In both cases, the original release effects shots covered them from enough angles, and both had model kits and other reasonably reliable sources (plans, etc.) issued during the show's original run.

The CGI model matches the form of the studio used Botany Bay, a DY-100 class ship. One of the original studio models is housed at the Smithsonian museum. 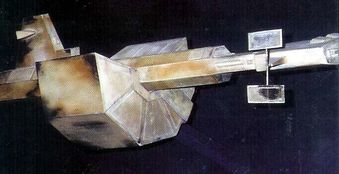 And it matches the original sketch designs of the DY-100 ships.

Aside from a few retcons like the Woden, all the cgi models are very true to form of the originals. Any significant difference would be highly criticized by nerd and normals alike. Except for the gaudiness that the cgi models add. The original props look so much better.

Not the answer you're looking for? Browse other questions tagged props effects star-trek star-trek-the-original-series .

5
How was the space station fly-through in 2001: A Space Odyssey filmed?
2
How were the CGI scenes created for National Geographic series WW II Greatest Raids
9
Was CGI used to make Will Smith look different in the movie Concussion?
9
Why didn't somebody at the Yorktown space station just transport Krall and the weapon into space?
6
Was the scenery in Casper (1995) CGI?
3
At how many different scales were starship Enterprise models produced?
4
Was this miniature in "Requiem for Methuselah" ever used to portray the Enterprise in space?
4
Do the later films in the "Night of the Living Dead" series use CGI?
6
Was the HBC (Hudson's Bay Company) mug a deliberate prop in "The Princess Bride"?
3
Why is the dog in The Call of the Wild done with CGI?