Inverted rainbow in The Little Mermaid

The rainbow sent by King Triton at the end of The Little Mermaid is inverted (blue is at the top). 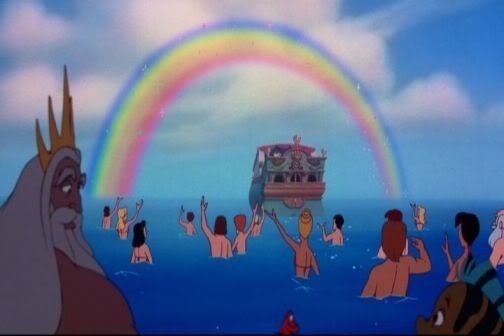 Has this ever been explained by someone linked to the film's creators? Possibilities I can think of include

But I'm not really interested in speculation, just creator-attested reasons, if any exist.

I contacted Disney Animation through Twitter and asked if there was a reason why:

As you can see, the answer was: Nope.

Unfortunately, we may never know the reason why Disney chose to invert the colors of the rainbow in this scene.

Given the response from Disney Animation, we just have to assume that it's another bizarre "Disney-ism" that Disney likes to throw into their films.

However, there's an interesting point to ponder:

Disney used their Computer Animation Production System for the first time only for this specific scene.

The system's first feature film test was in the production of The Little Mermaid in 1989 where it was used in a single shot of the rainbow sequence at the end of the film.

Perhaps it was just a mistake due to the use of this new animation technique.

There may never be a definitive answer to this question, I'm afraid. I will have to take Disney Animation's response of NOPE as the answer.

Not the answer you're looking for? Browse other questions tagged the-little-mermaid .

11
Are the mermaids from The Little Mermaid intentionally modeled after/inspired by the mermaids in Peter Pan?