Why did the Malfoys flee on foot?

At the end of Harry Potter and the Deathly Hallows: Part 2, when Harry reveals himself to be alive, we see the Malfoys flee the scene on foot. 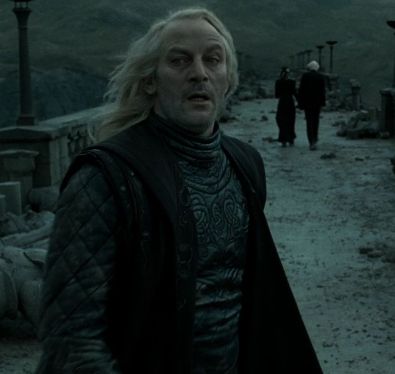 Wouldn't it have made more sense to apparate away, ensuring they're not dragged into the ensuing fight and making it as far away as they needed to? It appears other Deatheaters were flying away when the final fight broke out, so why didn't they do something similar? They just sort of casually walk back across the bridge.

They can't disapparate or apparate because they are at Hogwarts. The Apparition wiki entry at harry potter wikia explains the ins and outs of apparition spells. (who, when, where you can, etc)

Some places that you can not apparate into are Azkaban, Hogwarts and Nurmengard.

As to why they wouldn't fly away, to be honest this part of your question seems to border on opinion-based questions. The best answer I could give as to why they didn't fly away would be that they are the Malfoys and they are too proud to simply fly away. That's just a theory though. Or else maybe they didn't have brooms.

One could argue the protective enchantments had fallen, or that the Malfoys had one wand between the 3 of them.

They are all seen at the battle, they need to be seen clearly leaving it. If you saw them disapparate, it is not clear why or where they go. They could be taking up flanking positions. By walking away, they are making a clear statement to the Order that they are no longer involved with Voldemort. J.K. Rowling indicated on Pottermore and in interviews that the Malfoys do not get imprisoned after the war. Part of why they were free was because they helped Harry (Draco at the Manor, Narcissa in the forest). All 3 were seen at the final battle, in order to secure a good defense they need to leave in a fashion that shows the Order that they are not loyal to Voldemort (who is facing the other direction). They can say that they only came to Hogwarts to find Draco and ensure his safe return home. Also remember that up until this point, Lucius has done nothing to help Harry, but he is left with a choice between following his family or staying to fight. That, combined with his testimony against the Death Eaters after the war secures his freedom.

I agree with above answer that they can't disapparate or apparate because they are at Hogwarts. Also, I would like to add that, I think that they didn't fly away, because they didn't have their wands with them. Remember, Draco Malfoy lost his wand to Harry in the scene before Dobby's death. Narcissa gave Draco her wand to be used at school in Hogwarts. Lucius Malfoy's wand was taken by Voldemort in the very beginning of both movie and book. This is why they couldn't use magic.

I'm of the impression that they, the Malfoys were all "wand less" Voldermort took Lucius's wand which was subsequently destroyed in the flight from the Dursley's to the Burrows, Draco had Moms wand since Harry disarmed him at the Malfoy Manor and Harry was using his (Draco's)wand .If I'm correct that left Mom wand less as well at the time ... just a thought....

Not the answer you're looking for? Browse other questions tagged harry-potter the-deathly-hallows-2 .

5
Where did the snow in Hogsmeade come from?
26
What is the nature of Professor Snape's Patronus and why does it appear in the Forest of Dean?
9
Did Harry, Ron, and Hermione just kill an innocent Goblin?
6
How did Lord Voldemort die even though Harry Potter survived?
6
What happened to the child of Professor Remus Lupin and Tonks?
8
Why do the items stop duplicating?
3
Did Dumbledore already know this?
2
Why did Voldemort kill his own horcrux?
6
Why does Harry say that there is only one Horcrux left, after only having destroyed 4?