What was the prop the sample Spock shatters with a squeeze made of?

In the Star Trek original series episode "Balance of Terror", there is a briefing room scene. In the scene, Spock holds up a sample of recovered debris. Spock's in-universe description calls it:

From the outpost's protective shield. Cast rodinium. This is the hardest substance known to our science.

From a production perspective, the scene starts with Nimoy holding a prop which has to be sturdy enough to handle and pretty much wave about, yet brittle enough to shatter with an apparently effortless squeeze (although it might not have been entirely effortless).

What was the prop made of? 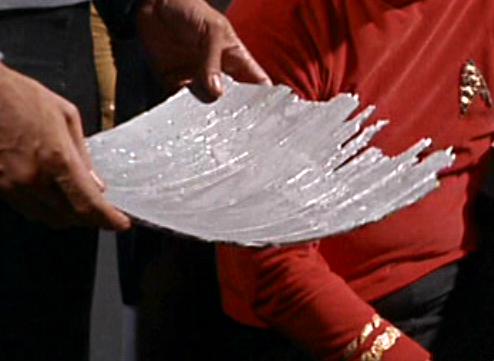 13
What is the prop meth made of?
9
What was the original Robocop's suit prop made of?
6
What is the history behind Scotty's hidden freezer and bottle of Scotch?
15
Was the Star Trek episode Catspaw originally intended as a Halloween episode or was it just coincidence?
6
Why did Spock and McCoy lie about not watching Kirk's final message in "The Tholian Web?"
4
Was this miniature in "Requiem for Methuselah" ever used to portray the Enterprise in space?
7
Was there cigarette smoking on "Star Trek (The Original Series)"?