Where did the line about the reason for the big eyes come from?

In the movie Big Eyes (2014) when asked by her then boyfriend Walter about why she paints the eyes so big that they are way out of proportion Margaret Keane explains it as "When I was little, I had surgery that left me deaf for a period, and I couldn't hear, so I found myself staring. I relied on people's eyes."

When I've searched the net after watching the movie about Margaret Keane's life story I couldn't find any reference to this quote. Her own explanation for the inspiration is : "Children do have big eyes," says Margaret. "When I'm doing a portrait, the eyes are the most expressive part of the face. And they just got bigger and bigger and bigger."

So my question is about the background of Amy Adams' line in the movie about the reason for the big eyes. How were they added into the script? The real Margaret Keane was sitting just behind her on the park bench in that scene.

According to Screenwriter and Producer of Big Eyes, Larry Karaszewski, the information regarding the quote provided in the film by Amy Adams while portraying Margaret Keane was obtained from interviews that the writers had with the actual Margaret Keane.

I sent Mr. Karaszewski a message via Twitter asking him this question as well as providing a link to the question itself. He was kind enough to reply: 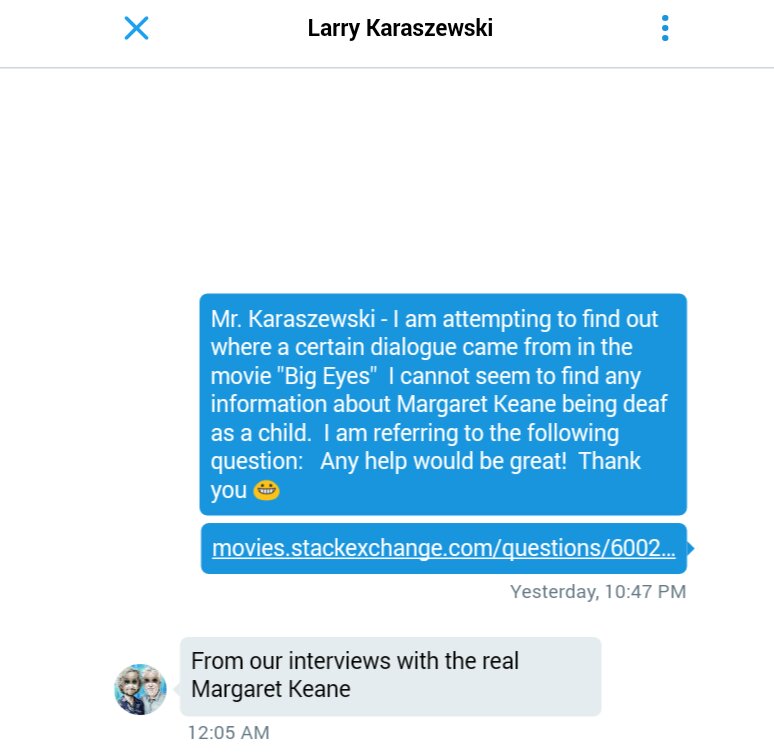 There seems to be no information in any interviews with Margaret Keane that I could locate regarding the quote from the film during my research. I do have a response from a person who was fortunate enough to have spoken with Margaret Keane.

I am satisfied with Mr. Karaszweski's response of "From our interviews with Margaret Keane" as a reliable source.

Not the answer you're looking for? Browse other questions tagged dialogue big-eyes .