How could Andy carve out the bible to hide the rock hammer?

In "The Shawshank Redemption", Andy is shown hiding the rock hammer in a bible whose pages have been carved out in the shape of the hammer. The question is: how could he have managed to do it? It would have taken him a very long time to do that, perhaps several months. Where would he hide the hammer until then? How could he get rid of the parts of the pages that he had carved out of the book?

He has a rock hammer, which is a device with an end hard and sharp enough to carve out fine details on small rocks, or to excavate a tunnel through a prison wall.

Paper is not as hard as rock, so the rock hammer would be an obvious choice for cutting out a shape in paper.

He could trace the outline of the hammer on a page of the bible, since he had plenty of access to writing implements. First carve out a single page, which would serve as the template, and then repeatedly carve out pages below using the first cut-out as his ongoing guide. This would take a matter of hours to cut through hundreds of pages needed, not months.

If he was working on his chess pieces, and got caught, then he has doesn't have to try and expose his tunnel to hide it. Instead of scrambling to put furniture, a poster, mattress, sheets or a pillow back into place, which triggers suspicion, he has his Bible in hand, which is encouraged by the Warden. If he gets caught with the hammer, he has his tiny carvings as the reason, takes a hit and spends time in the Hole. As Redd stated, no one would look at that and think it's an instrument for escape. Getting caught with that would not trigger a search for a tunnel in his cell.

Scraps of paper could be flushed or just thrown in the trash can, that's not going to raise suspicion. 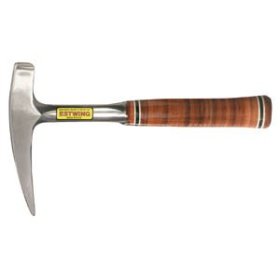 Andy had the hammer almost as soon as he got to prison. it was one of the very first things he asked Red for. If you recall, it was while he was scratching something into the wall in his cell (I can't remember if it was his name or checking off days or whatever) that a large chunk of the wall fell out, which gave Andy the idea to dig through the wall.

As for where he hid it before he had the outline cut out in the book, well... Use your imagination. ;o)

No one has stated the obvious... rocks. Flint is easily used as arrows, why not as a cutting utensil? Like, a shard of flint could have been a very adept tool at cutting the pages of the Bible, which... I've noticed it was a King James Version. It's generally printed on onion paper (very thin).

He couldn't have done it, as others have said, he would have needed a very precise sharp blade to carve so perfectly into the pages of the book. He also wouldn't have been able to put the poster back on the wall (fixed at each corner as not to move when the gaurd throws something through it to discover the tunnel) after he crawled into the tunnel. But in the film, he just did :)

31
Did Andy Dufresne use more than one rock hammer to escape from Shawshank?
6
How does buying goods from outside prison work?
5
Why was Brooks released? Couldn't he have squealed on the Shawshank crimes?
9
Would Andy be shielded from the law in Mexico?
57
Why do people call Morgan Freeman's character Red?
8
Why does Andy choose the poster of actresses rather than any other less suspicious pictures?
15
How did Andy Dufresne write the letter to Red before actually meeting him?
7
How did Andy's Bible get into the warden's locker?
2
How did Andy bring down the authorities on the warden?
19
Approximately how much money did Andy save Mr. Hadley?