Would a DeLorean actually break apart into a million pieces if hit by a freight train?

The scene in Back to the Future III where the freight train destroys the DeLorean seems a bit unrealistic to me. It makes the car look like it was made of wood or cinder blocks. Maybe if the train was going 100 mph and the DeLorean's brakes were applied. 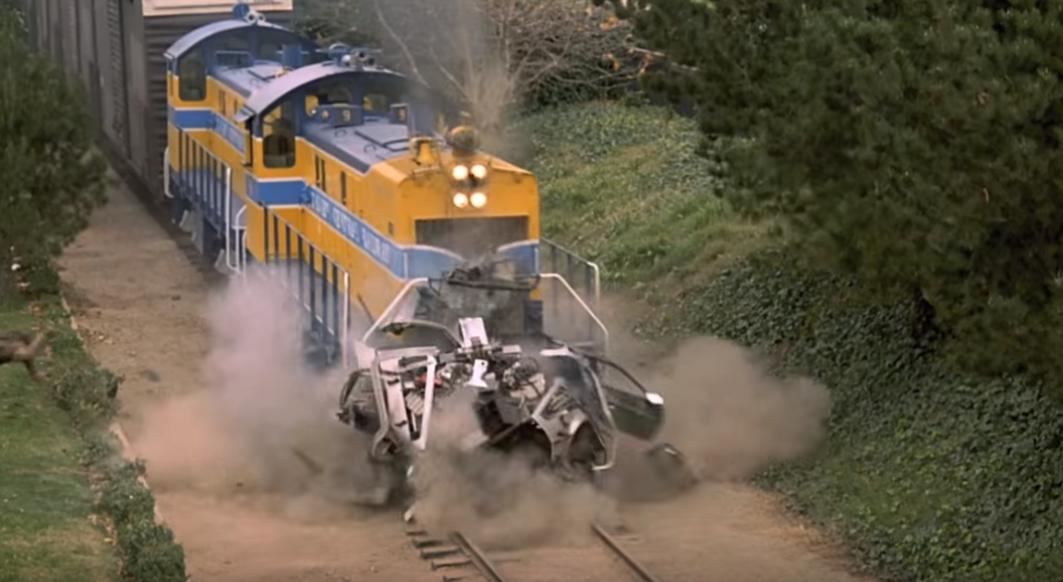 Would it actually happen this way? Obviously the car would be heavily damaged but wouldn't it just crumple at the front and get pushed along the track?

Had it been a Ford full metal truck, no. But a Fiberglass DeLorean, especially a questionably modified one, sure.

No, the car would probably not explode.

Cars get hit by trains all the time in reality. In general, a lot of the momentum of the train goes into moving the car -- either pushing it along the tracks or hurling it to one side, depending on the situation.

In reality, what most likely would have happened in BTTF is the Deloran would have been hurled off to one side with a huge dent in the side. Some parts would probably have fallen off (doors, windows, etc.) but the car would likely not have disintegrated. If the car was very precisely placed on the tracks, it may have been thrown forward ahead of the train, and probably hit again, in which case it would be in many more pieces. But the car itself remaining in-place and falling apart is not very realistic.

I originally thought that this was completely possible, but after looking into how they achieved the effect, I am convinced that in real life, the DeLorean would have been crushed and would have lost a few parts, but not disintegrate to the degree that the movie DeLorean does.

This page mentions in the "Future Facts" section that the DeLorean that you see on screen was cut up and rigged with explosives so that it would explode apart when the train hit. In fact, if you look at the this clip (about 17 seconds into the video clip) you can see the explosion for a frame or two. The cut up and exploded DeLorean's body panels were actually reassembled at the Planet Hollywood Honolulu restaurant and can be seen here so you can see how the car was sliced up.

Train-car collisions definitely cause some devastating damage, but in real life you can expect more crumpling and crushing than exploding into a million pieces.

Not the answer you're looking for? Browse other questions tagged realism back-to-the-future-part-3 .