How do the live audience of "The Late Show with Stephen Colbert" see the funny animations or catch the jokes with punchline on screen?

Okay, so I've been watching The Late Show With Stephen Colbert for almost a year now, and I love every bit of it: the snarky-but-nice humor, the irreverent political satire, everything. But what's been bugging me for some time now is how the live audience see things like Cartoon Trump or the punchlines that come up on screen in segments like The Werd, or even some of the throwaway jokes.

My question is, since we know that the live audience is real, and can hear that the audience does laugh at these jokes, how do they know what's happening on screen?

Assuming these animations are prepared before the taping then the audience can see them on monitors to the sides of the stage. 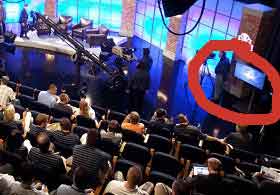 However, it seems more likely that these are added in post-production but I can't find a definitive answer, although this comment (from the article mentioned below) seems to indicate that these may be handy already.

...and finally time for the show to officially start. Colbert hopped on stage and began with his monologue. The whole taping ran smoothly, with Colbert only having a minor flub during the first few sentences and restarting from the top. Other than that, what we saw at the Ed Sullivan theater is almost exactly what we saw on TV. The entire taping ran about an hour to an hour and a half with pauses for commercial breaks during which the band played to keep the crowd energized.

There were some things that didn’t make it to the actual show. Some of the awkward pauses during the guest interviews were cut short or small bits that didn’t land with the audience were snipped out of the episode.

There's a whole article on what it's like to be in the audience which includes a more recent picture (2015) [Ignore the big red arrow] also shows the monitors. 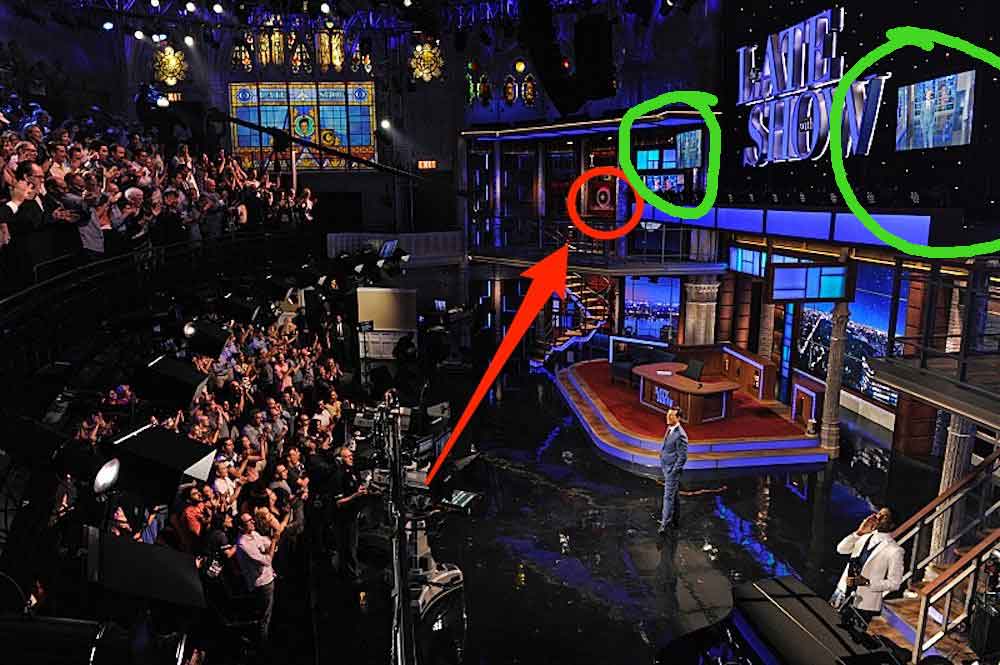