How did they make Yogurt so short?

In the marvelous film "Space Balls" Director and Actor Mel Brooks played multiple characters. One of these characters was Yogurt, a poor man's Yoda. How did they make Yogurt so short, compared to Mel Brook's normal height, as seen by his other character, President Skroob? 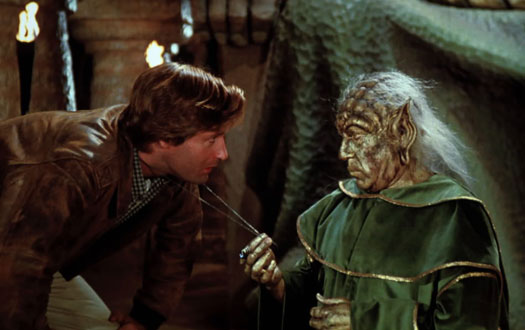 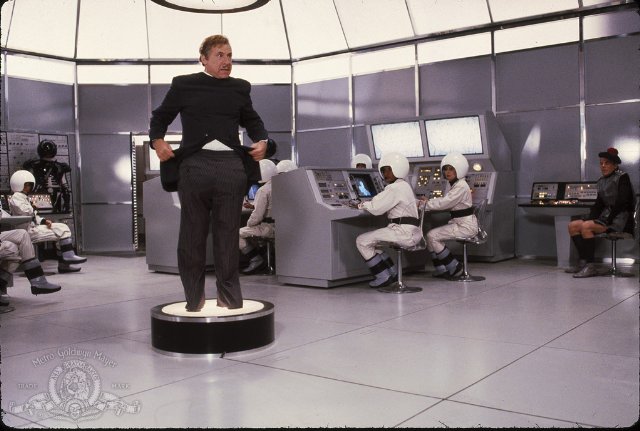 I always thought it was part of the joke that he's obviously walking on his knees.

In the DVD commentary, Mel Brooks talks about how difficult it was playing the Yogurt character. The gold-colored makeup gave him a terrible rash on his face and neck (necessitating the shooting of all of Yogurt's scenes out of sequence), also his knees were hurting constantly since he had to walk around on his knees even though he was wearing kneepads. Brooks also goes on to say that in spite of the difficulties, he enjoyed playing as Yogurt tremendously and that it was all worth it.

The rest of his legs are obscured by the long cape trailing behind him (based solely on observation, but again, it doesn't seem like they tried that hard to hide this fact. See the clip below, starting at 0:15, where they kinda bulge under it).

Mel Brooks shot all of Yogurt's scenes on his knees. After hours of shooting, he had such bad knee pain because he had to walk on his knees during any shots with Yogurt in them.

The article, 24 lesser-known facts about “Spaceballs” details it further:

Mel Brooks cast himself as the leader of the Spaceballs as President Skroob. If you wondered where that character got his name, it’s just an anagram for his last name “Brooks.” Brooks pulled double acting duty by playing the marketing schwartz zen guru Yogurt. Brooks found the Yogurt character to be much harder to pull off. Mainly because he developed a terrible rash on his face from the gold makeup. He also was in constant knee pain from walking around on them as he shot his scenes.

Not the answer you're looking for? Browse other questions tagged production effects spaceballs .