In The Lake House, two separate times Kate asks Alex to wait two years so he'll be able to meet her. First at the restaurant, and then at the end when she saves him from getting hit by the bus.

If he waits two years to meet her at a specific spot (the mailbox, the restaurant) wouldn't that also be a two year jump for her?

Now first of all, as many other time travel movies, this film also suffers from a not entirely consistent time travel logic and ignores some paradoxes that would arise from changing the past. Sometimes it uses a self-consistency interpretation where things already happened in exactly the same way as the people try to make them happen, and at other times it employs an interpretation where you can change the past. The film uses time travel in a way that's just logical enough on the surface to tell its story about fate, love, togetherness across time, so don't expect a 100% physicaly plausible interpretation of reality from this film. However, that being said, the time travel is still coherent enough to answer your question within the movie's own logic, in which the story still makes sense.

The main point here is, that there is not just the 2004 version of Alex that 2006's Kate converses via letters with, there is of course also the two years older 2006 version of Alex coexisting with Kate, they just don't have a way to make contact yet, but he's very well there. So basically Kate could actually simply meet this 2 years older Alex right now, it just means that Alex would have to wait 2 years from now on in order to meet her. (And in fact Alex cannot wait those two years and actually seeks Kate out, based on her tellings where she would be, before Kate even knew about him and when she was still together with Morgan.)

But they later make a real meeting and Alex makes a reservation in a restaurant 2 years in his future, which is just the next day for Kate, though. But since he doesn't appear in the restaurant, Kate thinks there is no future to this love and calls the whole thing off, which causes both to persue their own lives again for the next two years.

However, about 2 years later on Valentine's Day 2006 Alex remembers that Kate said where she would be at this day and he yet again seeks her out. And this brings us back to the beginning of the movie as Alex actually is the man she saw run over by a bus. At the same time Kate in 2008 coincidentally hears about Alex's death on Valentine's Day 2006 and makes the same deduction, so she hastes to the Lake House and tries to stop him from meeting her (and thus dieing). And this way she prevents his death in 2006 (which is where the time travel logic of the film actually breaks and we get into paradox territory, but so be it, let's just say it's a new timeline now).

And at this point she yet again asks him to wait 2 years, for his two years older 2008 version to meet her at exactly this place at the Lake House on Valentine's Day 2008. Here the movie makes a little leap in favour of the story. Since she has prevented his death in 2006, he could as well have tried to seek out Kate any time between 2006 and 2008, when she already knew about him. But in fact the timeline would actually already be changed anyway, due to Kate preventing Alex's death. To avoid this whole confusion, the movie glances over this here by adding yet another 2 years of waiting for Alex in order for his 2 years older (in sum 4 years older since the beginning) 2008 version to meet Kate right there at that moment and make it perfect.

In-universe you could say they themselves tried to avoid any confusions and wanted to make this moment perfect, as Alex showing up in Kate's life before 2008 might not have the same positive effect on her that it has now, once she knows the truth of why he didn't appear the first time. 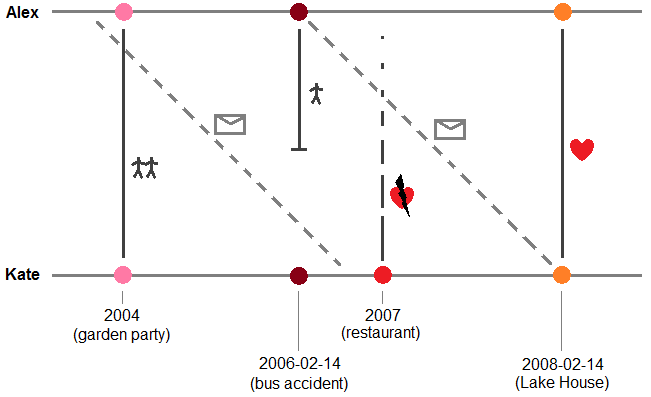 This diagram tries to show each person's individual lifelines (which happen completely in parallel in the same time) as well as the points at which they make contact with each other (or at least try to do so). But on the bottom line, the gist of the answer is that

The 2 years delay only applies to the letters delivered through the mailbox, there is still the 2 years older version of Alex coexisting with Kate right now.

Not the answer you're looking for? Browse other questions tagged plot-explanation the-lake-house .

8
How did Captain America survive being frozen for 70 years in ice?
4
Explanation for A Tale of Two Sisters?
4
Why did Vera beg for her life?
17
Had Julia realized Borden's secret, leading him to kill her purposely?
9
What was Ford's intention for keeping the hosts for 35 years?
2
How did Sapna become super rich, educated and well spoken in 2 years?
1
Why didn't Alex continue his pursuit of Kate after the party?