What does “CDE” mean?

In the movie Eye in the Sky (2015), the drone operator refuses to shoot the hellfire missile unless a "CDE" (if I heard it right) is run again. What is a CDE?

A Collateral Damage Estimate being the final report on the calculation of target vs collateral damage (aka non-combatant civilians or friendly forces casualties [injuries] or fatalities [deaths]), with an authorized/legal/acceptable margin before using a weapon would be considered illegal or even a war crime, an estimate based on weapon strength and any other circumstances. In the movie, the circumstances involved explosives from a Suicide Bomber's Vest enhancing a drone's air to surface missile's explosive power.

Col. Katherine Powell: Do we have that CDE yet?
Sergeant Saddiq: Yes, ma'am.
Col: Good.
Sgt: If we target this corner room here, where the explosives are, we would expect 100% mortality rate in that room and an 80 to 90% rate within the rest of the house.
Sgt: The market should be safe, but this area here in the street...
Sgt: A 65 to 75% rate. That's just the Hellfire.
Sgt: If we factor in the explosives in the vests, we're looking at even more extensive damage way out to this area here.
Sgt: But I can't accurately estimate that yield.
Col: But we would be containing that payload in the vests within those walls, right?
Col: Far less collateral damage than them going off in a crowded shopping mall.
Sgt: ... Yes. Of course.
Col: Yeah. Thank you.
Col: Obvious to anyone not trying to avoid making a decision.

So, can you clear me to a higher CDE?

Harold, this is a very time-sensitive target.

Do I have authority to strike?

The rules of engagement you're operating under only allow for a low collateral damage estimate.

Yes, yes, and my weapons only invoke a low CDE.

It's the explosives inside that house that bring it to a potentially high CDE.

And since you know the explosives are there, it is incumbent upon you to take them into account.

I can see a potential legal objection.

From "Slides used in the US Army Judge Advocate General's School, Center for Law and Military Operations (CLAMO) class “An Introduction to the Collateral Damage Methodology (COM) and the Collateral Damage Estimate (CDE),” 2009", a possibly out of date but generally still valid presentation. A very in-depth view on the subject if you want to read it: 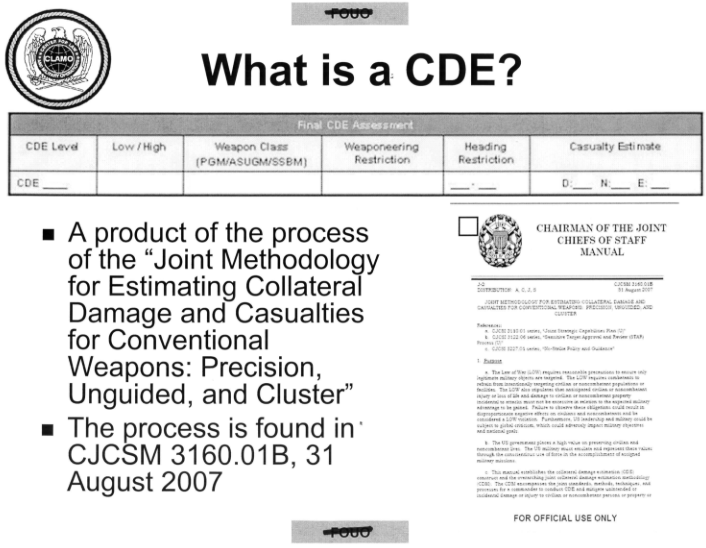 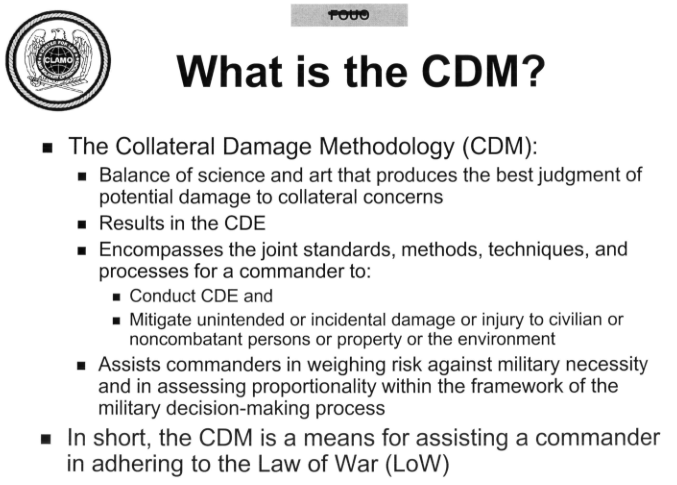 Seems like it's an abbreviation for "collateral damage estimate".

There's actually an article about this in the Air Force Times Magazine.

Q. Why did you show in such details the approval process for an airstrike?
A: I spoke to people who train drone pilots. The line that Aaron Paul (2nd Lt. Steve Watts) gives, "I am the pilot in command responsible for releasing this weapon, I will not release this weapon until you read me a new CDE [Collateral Damage Estimate]" is an absolutely accurate line to train the pilots because drone pilots, not just as the person who pulls the trigger, have the right to confirm that that order is legal if they doubt it. ... If they follow an illegal order, they can be charged with a war crime.

Not the answer you're looking for? Browse other questions tagged dialogue eye-in-the-sky .