It's intentionally left up the audience to figure out what it means. It is lifted straight out of the source material, the 1988 comic The Killing Joke by Alan Moore and Brian Bolland. So much so that 20 years later, Bolland explains the ending in the afterword for the 2008 re-release:

That said, there's always the other interpretation. Batman is trying to stop the Joker from killing himself. Like he did the other most influential Batman comic, Frank Miller's The Dark Knight Returns just 2 years earlier, which was also turned into an animated film, 2 (okay 3) years earlier. 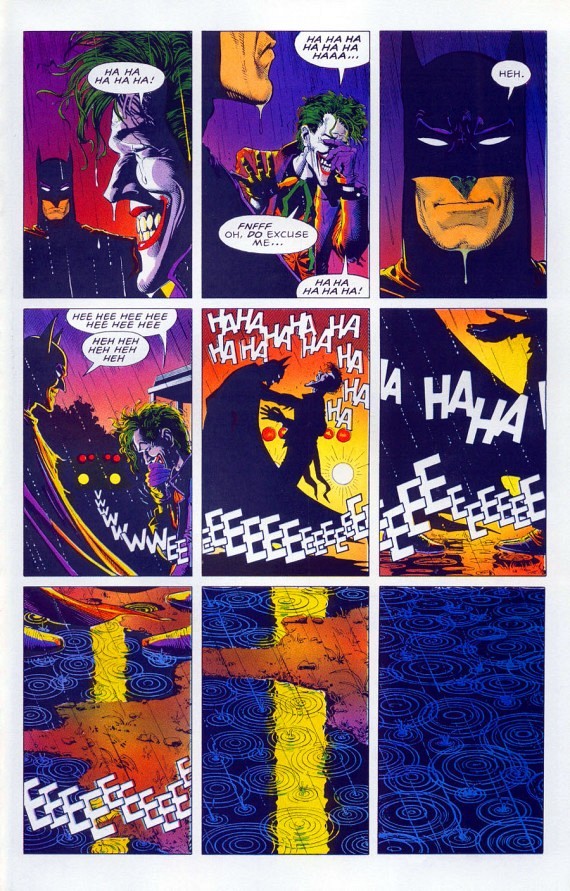 Since most people are saying that the ending conclusion is up to the audience to decide i feel like its the end its done now the reason for batman laughing well that's tough knowing that his sense of humor isn't like anyone else's just like the jokers so they both share and have a lot of things in common but mostly the whole abyss thing how they accepted it joker isn't afraid he just accepted his personal abyss as the batman they probably dint share the same type of abyss but they have accepted it so if the joker and joker realizing that when batman tells him what Gordon told him about "doing it by the book" he realizes they are crazy for "doing it by the book" and the batman realizes joker will never be sane again which is why i think he laughs what else can he do??..I don't know if this made sense too anyone or if you kinda got my point understanding of the ending on Batman "The Killing Joke"....LilB951 June 16, 2020 1:48 a.m

8
What happens to the girls at the end of the movie?
5
What are we to make of the ending of The Great Silence?
12
What was the ending of Batman v. Superman about?
6
What happens at the end of Uppi 2?
4
What is the significance of the Joker's plan?
8
What is the significance of sex scene in Batman: The Killing Joke?
5
Why change the ending of Inferno from the novel?
7
Was Lego Batman the only Batman with a seemingly sentient computer?
9
In The Dark Knight, does the Joker know who Batman is?
13
What is the meaning of the disappeared ball which George W Bush wanted to catch?