Which year in the future did John Connor and Catherine Weaver go to? 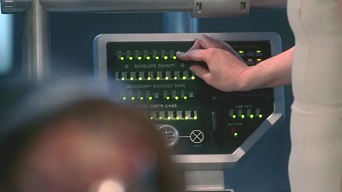 When they came to the future no one knows who John Connor is. So does anyone know which year in the future John Connor and Catherine Weaver traveled to?

Not sure if this the right answer or there's a proof for it but I assume it's the same time they were originally got sent back from, which is 2027 and in this time line, Alison still alive and no one know John

and from Alison wikia

Following the deactivation of Cameron at the hands of John Henry, John Connor and Catherine Weaver jumped to 2027. However, this was an alternate timeline where John Connor never became leader of the Resistance. There they found Allison Young alive and well with Derek and Kyle Rees.

Edit : OK, That was not really correct. From this

Q: What year did John Connor and Catherine Weaver jump to?

A: Unknown. There was no display indicating the destined time period in John Henry's chamber, only a countdown clock. There is no official date given for their arrival in the episode; however, it could be assumed that it is either 2026 or 2027 by the ages of Kyle and Derek. We know only that it is sometime after Judgment Day. It could be, or may not be, before John Connor takes control over the Resistance. In this new timeline, it is possible John may not have existed (which is likely due to the transport as no one would have grown up to become John Connor).

6
Did John Connor fall in love with a Terminator?
1
Who is Saying "I love you too" in the end?
1
Is Cameron becoming human?
3
Did Cameron betray John Connor?
3
What was the age of Sarah Connor when giving birth to John Connor?
1
How was "Derek Reese" alive in the future?
1
What did Martin Bedell do in the future?
4
What is Cameron meaning by saying "I call 9 millimeter"?
0
Was Skynet unaware of how John Connor was conceived?