Why does Steven Spielberg use this type of effect in his films?

The following screenshot is taken from Bridge of Spies:

Here, light is seen passing in front of a man's head. The same type of effect is also used in War of the Worlds, Artificial Intelligence, and The Terminal.

Why does Steven Spielberg use this type of effect in his films?

Spielberg has a number of techniques that you can spot him using in many of his films. In fact, there is at least one website that examines 15 of his common techniques.

One of my favorites, for example is the foreground-framing device where the camera peers through some other open object (a fence, a box, a chair) to highlight the actual subject of the shot. This is why the 3D version of Jurassic Park has some terrible aspects to it, as the 3D emphasize the frame rather than the intended subject.

That framing technique is #8 on the aforementioned site, whereas the specific technique you're curious about is not mentioned. The closest we can come is item #14, "Dark Silhouettes Against Backlight", which talks about that technique's "quiet, intense drama".

So, first, you're not crazy or picayune to notice this or to consider it an effect. It IS an effect, even if it's not done in a computer! It's a technique that long predates Spielberg. Offhand, I can recall its use in '40s/'50s Westerns, and I suspect we would find it goes back to German Expressionism. I wouldn't be surprised to find there was some improvement in camera technology post-War that made shots like this possible using just the sun (versus staged lighting as would've been done in the '00s, '10s and '20s).

We can break down the "why" with two questions:

The first is senior, I'd say. If we like what we see, if we're pleased by it, aesthetically, we are more likely to go along with the rest of the film. First and foremost, in other words, we must "buy in". If we don't buy in, we never get to the second. So it's always possible that the answer to "why" is "because it looks cool".

That aside, how does lighting in shots make us feel? Let's do some easy ones:

The lighting suggests "mystery" but not "threat". It suggest "heaven", not a little. We feel excited, but if we're scared it's an excited feeling, like a roller coaster, not a "the shark's gonna eat us" feeling.

Here the lighting also says "mystery" but in a different way. This is more like "weird" in the pulp sense (otherworldly), scary, yes, but like a comic book, not a John Carpenter film. (And, man, you could do this all day with Carpenter, too.)

How about this one? 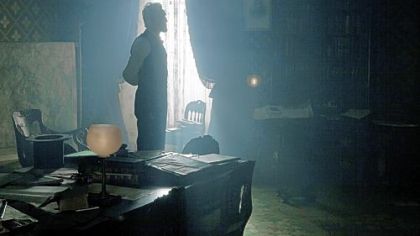 Here we see a figure, almost divine, bathed in glowing light (last seen on our guys going into the space ship), but also looking alone, isolated, separated as it were by his sheer enlightenment. And of course with foreknowledge of his doom.

So, what did you get out of that behind-the-head lighting? For me, it seemed to suggest that Hanks' character was good, was carrying the truth (the light), but also isolated from others who had their own agenda. And I don't mean to say, of course, that I thought those words in my head—and I can't imagine Spielberg thinks in that way, either—but if I had to put the feeling into words, that would approximate it.

But you are absolutely correct to note that it is an effect, and it is done for a reason. Someone on that plane of artistry does not say, "Well, we need to get this shot and the sun's behind his head, so, whatever..." A quick Google search will reveal dozens of articles written about just this subject: How Spielberg uses light.

Not the answer you're looking for? Browse other questions tagged film-techniques effects steven-spielberg .

3
Why do they develop this DIY Lucy device and not use something available?
6
Why is this effect used in the locker room?
7
Why does Tarkovsky use monochrome and color in the same film?
8
In Cabin in the Woods, why does he start the car with his left hand?
34
What kind of special effect did Alfred Hitchcock use in this scene for “The Lady Vanishes”?
6
Showing old TV programs in modern films, is this a special effect?