I've only a vague recollection of this science fiction movie, probably released between 1965 and 1972, which features two humanoid alien men on Earth, hunting for a female alien, who has disguised herself as human.

The aliens wear special eye-glasses or sunglasses, which, when worn, can distinguish aliens from normal humans. The film ends with the death of one or both of the alien men, and in the final shot the camera pans through a pair of the special glasses, which have fallen to the ground when one of the aliens was killed, and as we look through them they reveal the identity of the woman who was being hunted.

So fas as I can recall, I think the woman turned out to be an alien robot; but I don't remember why this was significant.

I've searched through lists of SF movies of the Sixties and Seventies, but without finding any title that rings a bell.

I think you are looking for The Love War, a made-for-TV movie from 1970 (you can see it on youtube):

Two different alien races are at war. Representatives of each race have landed on Earth to battle it out here, but they're being sneaky about it: They've taken human form and they can only spot other aliens through the use of special glasses. (imdb)

Here's your alien in sunglasses: 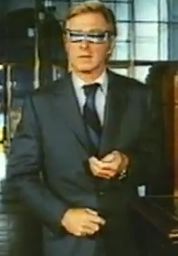 And the view of Angie Dickinson through the glasses on the ground at the end: 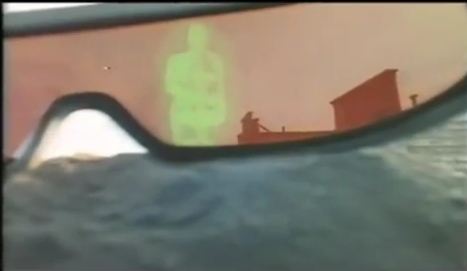