Ask Question
Asked 3 years, 6 months ago
Active 2 years, 10 months ago
Viewed 350 times
8
votes
Closed. This question is off-topic. It is not currently accepting answers.
Closed 2 years ago.
Locked. This question and its answers are locked because the question is off-topic but has historical significance. It is not currently accepting new answers or interactions.

I'm looking for a movie about a woman who was a stripper and meets with a bald man in the club. He wanted to marry her and she denied, but after that the woman gets in a car accident. When she woke up, she was in a place she doesn't know and the bald man was there with her, still asking her to marry with him. After an accident, the woman loses her ability to speak and some of her body parts were broken, so she can't be a stripper any more. She feels like she has no other choice but to marry him. Then they have a son.

In the very end, the woman figures out her husband was a master doctor and his ex wife has died of an accident and his daughter is completely sick and needed a donation. And he wanted to marry her to have a daughter and wanted to use it to save his own daughter. The woman tries to escape but she couldn't.

All I remember is something like this. Anyone has any ideas? It was not Asian and American movie I guess. I watched it 10 years ago.

This sounds like Body to Body (Corps a corps, AKA Body Snatch) from 2003.

Laura Bartelli is a stripper in a French bar. She retires after a moody landscape architect named Marco Tisserand asks her to abandon her life and share his. However, after her red Volkswagen runs off the road en route to the rendezvous, she ends up scarred and comatose in a hospital. Marco stays at her bedside. After some months, she awakens in a world of silence and gradually begins her new life with Marco, which is filled with affection and tenderness. She begins to love herself as much as she loves Marco. They have a son, Jeannot. Laura's deafness is more an irritation than an impediment and six years pass in family harmony. However, when Jeannot displays an unusual dysfunction at school, she goes to see a psychologist in Lyon, and shows a photograph of her son with his father. The psychologist recognizes Marco as a former university student colleague and tells her that he is a doctor, a doctor with a past and even darker intentions for her and their child.

There are a few differences, though: The film is French, the man is not bald, and his sinister plan does involve transplants and his comatose daughter, but I think he basically wants to turn the stripper into his former wife and her son into his daughter. You can see the trailer here [Warning: Nudity]. 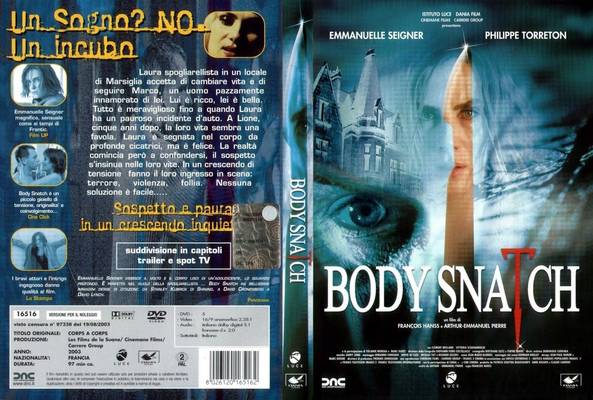