Did Sylvester ever catch Tweety? 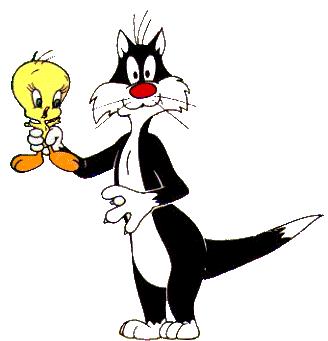 Sylvester actually grabs Tweety several times. Here's one example from Tweet and Lovely (1959) (it's around the halfway mark):

As for Sylvester actually eating and killing him, that also happened but it turned out to be a dream. From the synopsis of the final episode of The Sylvester & Tweety Mysteries from 2000:

Sylvester finally eats Tweety, but he's thrown in jail and the show is canceled resulting in the world crashing down on him. This turns out to be a dream much to the relief of Sylvester.

There is another cartoon called "Greedy for Tweety" (which was basically the follow-up to "Birds Anonymous") and while Sylvester, Tweety and Hector were in the hospital at that point, Sylvester did however manage to succeed in eating Tweety at one point.

But once Granny found out that he ate him, she did an X-ray on Sylvester and took him to the Puddy surgery (Emergency Room), where she proceed to cut him open to get Tweety out (from there on he came out with a large bandage around his stomach).