I'm trying to remember what movie this was. The bad guys, like 2 or 3, were trapped in a 2 dimensional plane that flew out into space. Family guy did a short parody once I think. I asked a few people in the office but no one knows. I feel like it might be one of the old superman movies but I'm not sure and can't find it online.

I believe that you are thinking of Superman 2. The villains (General Zod, Ursa and Non) had been banished from Krypton into the "Phantom Zone" which was depicted as what looked similar to a plane of glass that flew through space. Right up until Superman pushes a nuclear bomb out of Earth's atmosphere and into space to save Paris (I think). When the device explodes it breaks open the Phantom Zone and releases the villains.

The scene you are talking about where the bad guys get trapped is from Superman (the first film). Jor-El (Marlon Brando) imprisons three villains Zod, Ursa and Non. 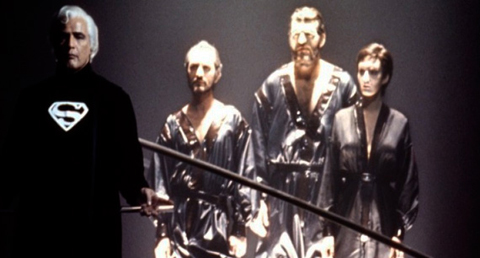 They don't feature further in that film, but are the main villains of Superman 2, when they are accidentally released. The imprisonment scene probably may be included in Superman 2 as a recap (I can't recall), but without Brando due to the production saga, and payment disputes