Was Kirk and Uhura's kiss in Star Trek really the first interracial kiss on TV?

It's been widely stated that the Star Trek episode "Plato's Stepchildren", airing on 22 November 1968, had "the very first televised interracial kiss", which was between Kirk (William Shatner) and Uhura (Nichelle Nichols). For instance, the Huffington Post said (empahsis mine):

Nichols stayed with “Star Trek,” and it’s a good thing she did — otherwise she may not have had a chance to make history again by being part of the very first televised interracial kiss, with Capt. Kirk, no less.

No, it was not the first

There are a couple of reasons for initial suspicion of this claim.

So what was the first?

First ever on TV (Hispanic?/Caucasian)

However, Desi Arnaz was often seen as white with Hispanic ancestry, so this may not count.

First ever on TV (African/Caucasian)

The British Film Institute found footage an earlier interracial kiss from the television play You in Your Small Corner, broadcast on 5 June 1962. When footage was discovered in November 2015, it was declared to be the earliest surviving footage of an interracial kiss on TV.

This footage was found as part of investigation for a BFI panel on race and romance, and during the panel it was announced that an even earlier interracial kiss was found. Hot Summer Night, another stage play, aired 1 February 1959 as part of the British anthology series Armchair Theatre. This included a kiss between Jack 'Jacko' Palmer (John Slater) and Nell Palmer (Ruth Dunning), who are African and Caucasian respectively.

First ever on ongoing TV

First ever on American TV

The Wild Wild West episode "The Night the Dragon Screamed" aired on 14 January 1966 and had Jim West (Robert Conrad) kiss Princess Ching Ling (Pilar Seurat). The former is Caucasian, the latter is a Filipina playing a Chinese princess.

First ever African/Caucasian on American TV

Movin' with Nancy aired on December 11, 1967 an had a kiss between Nancy Sinatra (Caucasian) and Sammy Davis Jr. (African). 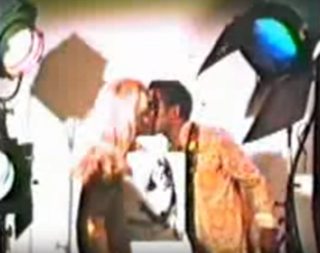 First ever with William Shatner!

Believe it or not, Captain Kirk himself has had an interracial kiss on TV before Nichols. He kissed Pilar Seurat (a Filipina) in the Naked City episode "Without Stick or Sword", airing 28 March 1962.

However, Shatner is playing the role of Burmese sailor Maung Tun, believe it or not. So this is not an example of the characters having an interracial kiss.

First ever on Star Trek

Yes, even Star Trek had an interracial kiss before Kirk and Uhura. The episode "Mirror, Mirror", airing 6 October 1967, had Kirk (William Shatner) kiss Marlena Moreau (BarBara Luna), whom All Movie lists as being "of Hungarian-Philippine heritage".

This was over a year before "Plato's Stepchildren" aired on 22 November 1968.

There's definitely some wiggle room for what counts as "interracial", but it's pretty clear that there are a number of examples of interracial kisses before Star Trek, including ones with Caucasian and African actors.

I have an old Star Trek book at home from one of their conventions. (Found it in an old book store and bought it because it has a picture of the Enterprise done in ascii characters) In there they talk about the kiss and how everyone on set was sort of playing around to lighten the mood. Then when they went to shoot the scene, the directors got a bit worried about the public backlash for an interracial kiss so in reality..

They didn't really kiss, just got close enough to look like it on TV.

Given that sort of information, can it even be counted as an on screen kiss?

Not the answer you're looking for? Browse other questions tagged first-appearance star-trek .