How did Mr. Monk manage to become a police officer?

I think the pilot implied that Trudy's murder triggered Monk's obsessive–compulsive disorder (OCD), which let to him having to leave the police force.

But the episode Mr. Monk and the Marathon Man contained a flashback, showing him at a younger age: 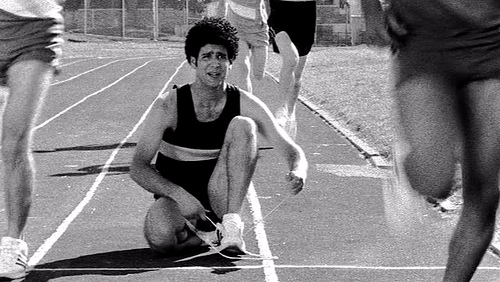 Young Monk wasn't able to run because he obsessed over his uneven shoelaces (after that episode the writers stuck with the idea that Monk already showed compulsive behaviour as a child).

I remember wondering if that was a goof, because if he had OCD before he became a cop, how did he manage to pass the police academy?

Did the show ever address how Monk got through police academy with his OCD?

He is a lifelong sufferer of Obsessive-Compulsive Disorder and has many phobias, and those obsessions became crippling after his breakdown, forcing his retirement; he recovers throughout the series, though he is never fully "cured". His OCD is also the reason Monk was such a successful policeman; one of his compulsions is paying amazing attention to details.

His becoming a cop before rising to detective is never discussed.

Unless in the last four episodes they addressed this, then no it wasn't. However, I'm not sure how much monk you have actually seen, but his OCD seems to get worse as the show progresses. My theory is that he wasn't as bad when he was younger, so getting through police academy wouldn't have been as hard. But that's just my theory

I hope this has answered your question :D

Adrian Monk was a very brilliant detective for the SFPD until he had a nervous breakdown due to his wife's death in the car bomb blast. He gradually started living in voluntary seclusion and was discharged from the police department. He finally was able to come out of seclusion after three and a half years with the help of nurse Sharona Fleming and this also enabled him to become a private investigator/detective.

My assumption is that the massive nervous breakdown was one of the key reasons of all his fear, phobias and disorders.

Not the answer you're looking for? Browse other questions tagged monk .

5
Why did Natalie Teager get a different job in "Mr. Monk and the Badge"?