In the 1980s I lived in the boons north of Toronto, and had only three channels on TV - CBC, CTV and Global. On one of these, and I want to say CTV but I have no idea why, I watched an extended episode of what was clearly intended to be a pilot for a show. I've been trying to track it down ever since. The time frame would have been from about 1981 to 1985, maybe a little later.

The show centered on a spy who was some sort of freelancer but had access to an agency's resources. The plot of this particular episode centered on tracking down someone who, IIRC, had stolen some data that his clients were interested in making sure never got out. The customers were represented by a woman who I assume would have been a guest start of the one episode. I do not recognize either of the main characters. The show was shot entirely in Toronto as far as I could tell.

I recall a couple scenes sticking in my head.

The first involved them trying to gain information from a recording of the bad guy's demands sent to them on a cassette. Using a computer at HQ, assisted by a fully mustachioed Harvey Atkin in a low-budget cop's outfit, they played the tape and the computer printed out a number of guesses at what it heard in the background. Playback ends, and the computer suggests playing back again with Dolby turned on. This time it can identify several sounds, including a ticket machine in a parking lot and the bell in Old City Hall. They conclude the recording was made at the Eaton Center's parking lot.

The second scene I remember is near the end when they have finally tracked down the bad guy to a yacht in the harbor. They board when he's not there and to destroy the data he simply crumples the floppy disk - a 8" model in a S-100 machine no less. I thought this was clever, one of the writers must have had a little computer experience.

At the very end he drives off in his convertible, after handing the heroine his card, which consisted solely of an image of an electrical plug.

I checked Harvey's entry on IMDB, but nothing hits. No, it was not the Avengers, New Avengers or anything like that.

Update: Thinking more about it, I seem to recall the bad guy's face, and I want to say Donnelly Rhodes. Likewise, the female lead could have been Sonja Smits, but I would give that a much lower probability. Looking over both's IMDB I don't see anything that could be this.

There was a Canadian series called 'Adderly', about an operative working for an obscure government intelligence agency. It ran for two seasons in the mid 1980s and from what I've read online, it sounds like it might be the show you recall. Folks who reviewed it on IMDB seem to have liked it a lot. 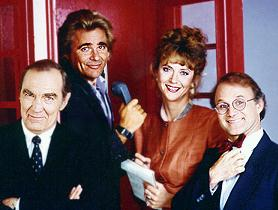 Harvey Atkin in a police uniform and heavily moustached? Sounds like Cagney & Lacey to me. IMDB link here. 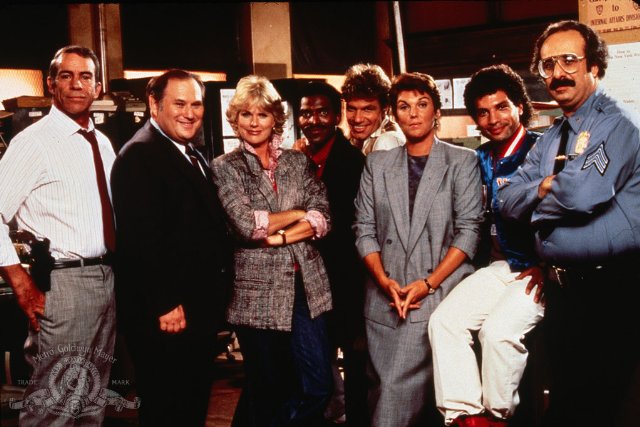