Was the world ever more radioactive?

In Godzilla (2014), it is mentioned that "those" creatures flourished when the world was more radioactive. Does it make sense?

Yes - but would be unlikely to have affected Godzilla

According to The Evolution of the Earth's Background Radiation Level over Geologic Time by P Andrew Karam CHP and Stephen A Leslie Ph.D of the Department of Geological Sciences at The Ohio State University, the Earth's current background Gamma radiation is 0.28 mSv/yr (millisievert per year) from radionuclides (Uranium, Thorium, Potassium and Radium) in the Earth's crust.

They go on to state how early in Earth's history the radiation from the earth's crust would be higher:

Using Taylor and McClennan's (4) model for crust formation and assuming that LIL concentration was equal to the percentage of crust formed (i.e. LILs had one half of their current concentrations when the crust was 50% formed) then, at the time that life evolved, surface gamma radiation levels due to contact with the continental crust were similar to those at present, rising to approximately twice current levels at the time eukaryotic life evolved. Therefore, life would have been exposed to up to four times current levels of external gamma radiation due to contact with the continental crust.

Life in the sea at this time would also have been in contact with equally high concentrations of radiation:

In addition, based on current 40K concentration in seawater of 11 Bq/gm, organisms in the water column at that time would have received comparable doses from 40K beta and gamma radiation.

The below graph shows the radiation peaking around 2.5Ga (2.5 Billion Years Ago). 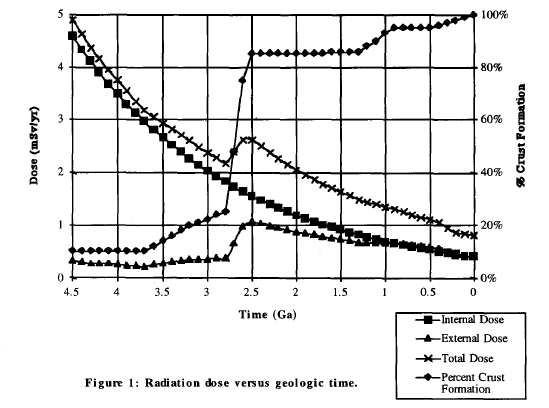 This was before the advent of multicellular life, let alone the time that complex creatures like Godzilla and the MUTO's. As we move towards the age of the Dinosaurs ~ 500 million years ago we can see the radiation levels are high, but closer to the levels we have today, around about 5% higher.

8
Is the Janjira incident a reference to Fukushima?
5
Is there any significance to the difference in Godzilla's roar?
11
What is Godzilla and what does he know and want?
9
Why is Godzilla released significantly later in Japan?
4
Is Kong last of its kind?
5
How much time was between Godzilla's appearances in Honolulu and San Francisco?
6
What is the name of this creature in "Godzilla: King of the Monsters"?
4
What are the names of the 17 Titans?
7
Who invented the time machine in Eve's world?