What is this dog really biting in The Thing?

In John Carpenter's The Thing (1982), when the infected dog is transforming and scaring the crap out of the other dogs, one of them jumps up and bites the chain link fence. It happens a couple of times in the following clip:

No, the dog definitely didn't chew a hole in a real fence. 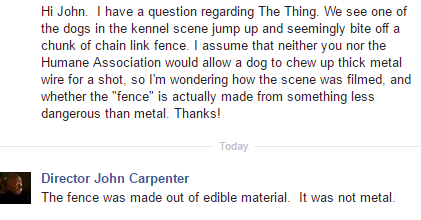 The fence was made out of edible material. It was not metal.
- Director John Carpenter, via private correspondence. 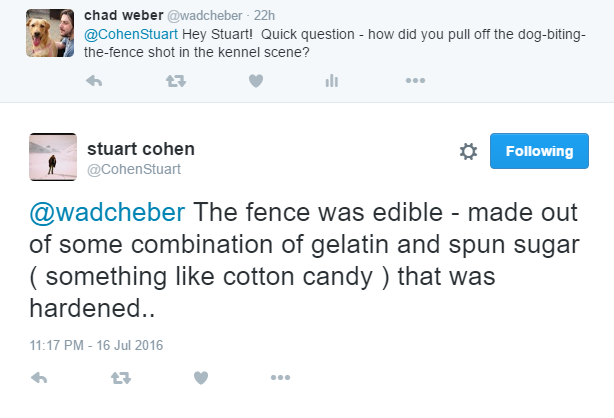 The fence was edible - made out of some combination of gelatin and spun sugar (something like cotton candy) that was hardened.
- Producer Stuart Cohen, via personal communication on Twitter.

Animal welfare on the set:

The dogs were very carefully handled and protected from harm throughout the film. The level of care for the animals is evident in producer Stuart Cohen's statements:

GREAT attention was paid to the welfare of the dogs in this scene. John is a dog lover (check out his Facebook page for charities he supports), as am I ( I work with abused dogs in my spare time). I'll write about the precautions taken on my blog in the near future...
- Q&A from the fan site Outpost #31

Here, Cohen is explaining why the shot of the dog-Thing spraying fluid on a sled dog is looped. As Carpenter says in the commentary track, the fluid is actually a food additive found in Twinkies. The dog was sprayed for a second or so, and the film was then looped to extend the shot, because Carpenter didn't want to cause the dog any more discomfort than was absolutely necessary.

My favorite sound effects story from THE THING is as follows... I asked one of the sound editors, Colin Mouat, how they came up with the ultra-realistic background sounds of the dogs howling in the kennel. He replied that he had his children gather together the neighborhood dogs on a Saturday morning, put them inside his house, turned on the recorder, left, and donned a hat and full trench coat. Pulling up the collar to hide his face, he then proceeded to furtively move around the house, tapping on windows and rattling doorknobs. The resultant hysteria is what you now hear (I was assured the dogs were amply rewarded with waiting treats).
- Cohen's blog, The Original Fan

What we actually see: 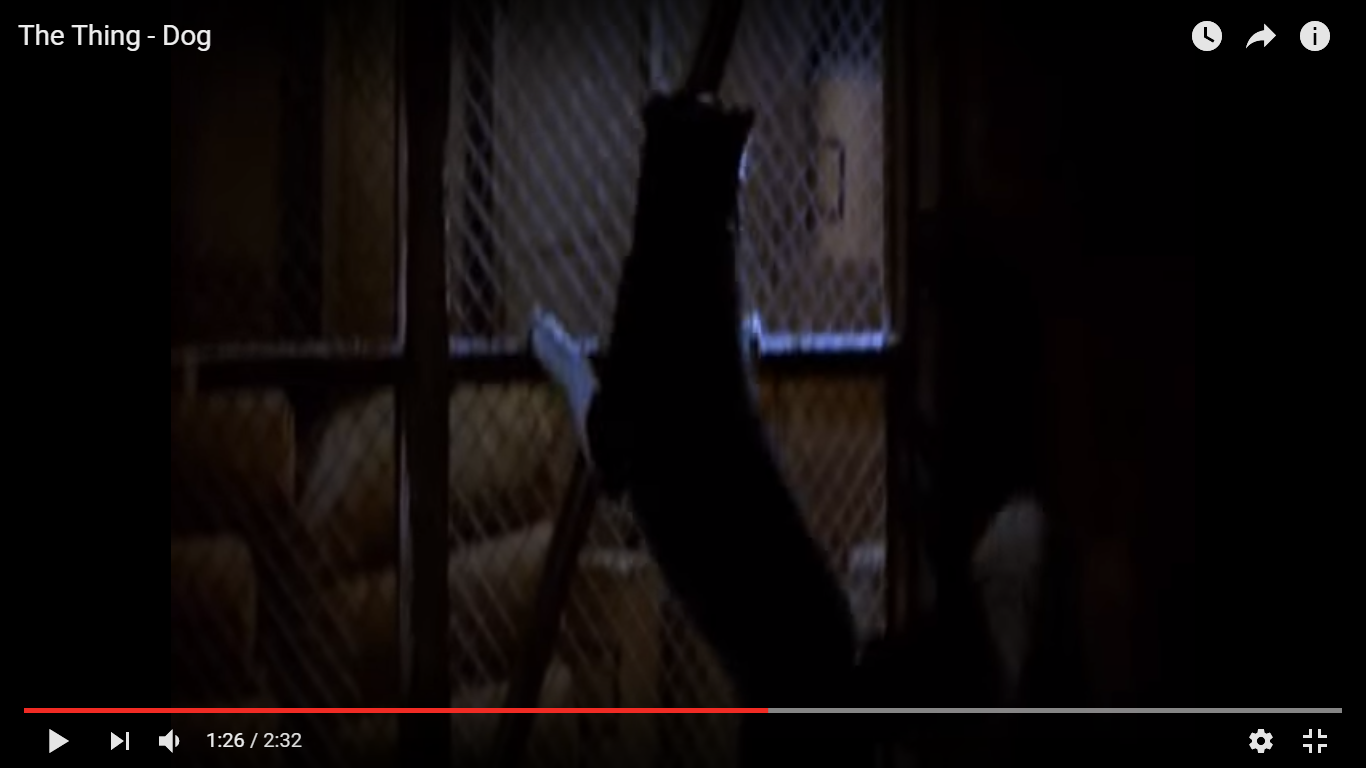 [The camera focuses on the Thing for a moment] 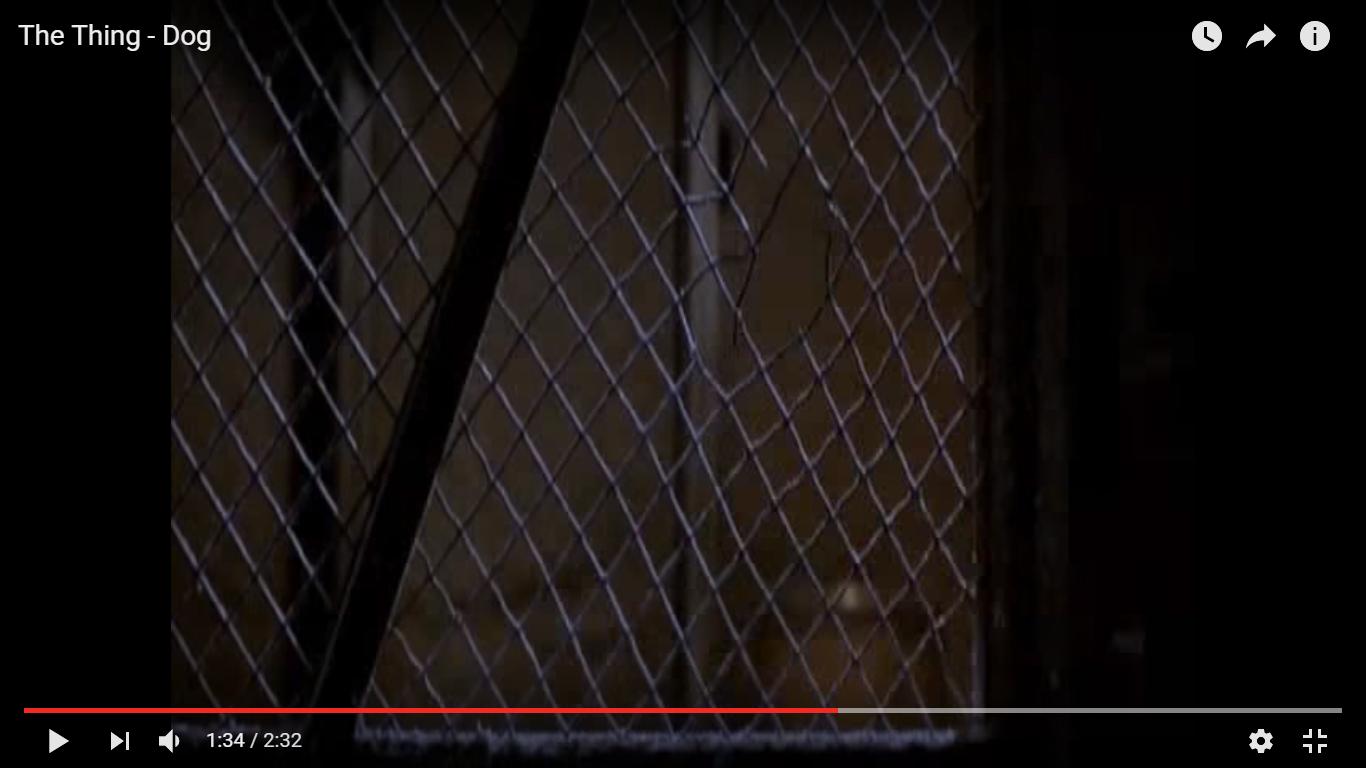 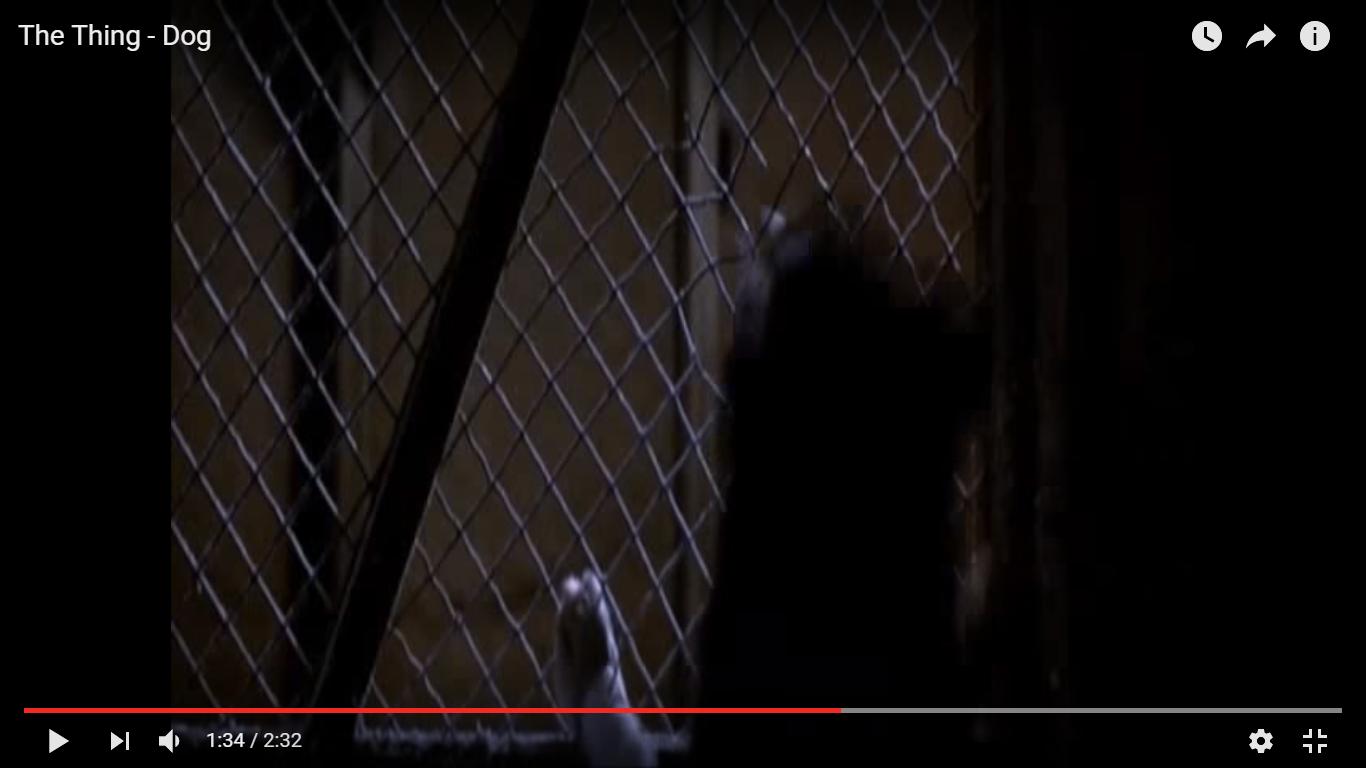 [Back to the Thing for a moment]

1:46: The dog hops up again, and now the hole is absolutely enormous. 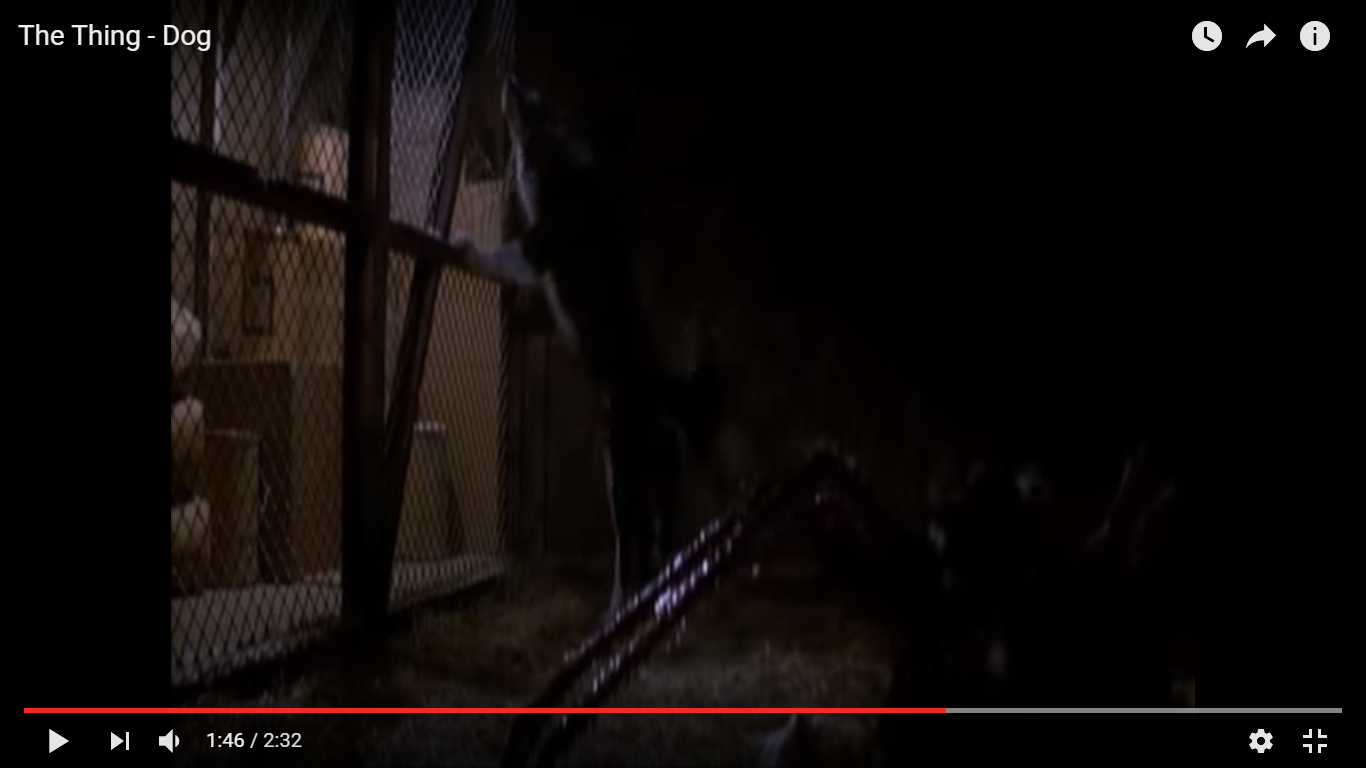 Clearly, the dog had nothing to do with making or enlarging the hole. Whatever the fence is made of, the dog's interaction with it consisted of tugging on it briefly, and perhaps snapping off a small piece of the material.

What we know about the shot:

According to director John Carpenter in the commentary track, the shoot was monitored:

The Humane Society was on set the entire time.
- Source

And this is confirmed by the credits:

The filmmakers wish to acknowledge the assistance and cooperation of The American Humane Association in the handling of animals in this production.
- IMDb

It is also consistent with Carpenter's charity work for the Humane Society:

The director makes his views on the mistreatment of animals clear: “Cruelty to animals is what's shocking to me. There's no excuse for abusing any animal, so I'm glad that the sale of these posters can play a part in helping to fund their protection,” says Carpenter.

Carpenter, a long-time animal lover who shares his life with wife Sandy, two cats and a dog, recently came to the aid of Malachi, a severely abused pitbull in his native state of Kentucky by contributing to the dog’s veterinary care and setting up a trust fund to help with the treatment and rehabilitation of other neglected and abused animals.
- The Humane Society of the United States

Thus, however the effect was achieved, it didn't involve a dog chewing up an actual chain link fence.

I've also contacted Bob Weathermax (the animal handler for the movie) and John Carpenter, asking them how it was done. I'll update this answer if and when I find something or hear from them.

Not the answer you're looking for? Browse other questions tagged props effects stunts the-thing .

3
Why does S.T.A.R. Labs look different in Vixen than it does in The Flash?

35
Why did Ennio Morricone write the soundtrack of "The Thing" (1982) instead of John Carpenter?
29
Infection timelines of John Carpenter's The Thing
10
What happened to Frou-Frou in the 1967 Soviet film Anna Karenina?
8
What is the pink thing on the Sherman tank?
25
Does The Thing have human intelligence?
3
John Carpenter's The Thing - What were the lights?
15
What is this round thing on the pantry door in The Shining
2
What happened at the end of The Thing (1982)?
8
Is the creature in "The Thing" a single creature?
3
Why is the dog in The Call of the Wild done with CGI?