Did The Littlest Hobo ever find a happy home?

In the Canadian Television series "The Littlest Hobo" did the titular dog ever find a home? 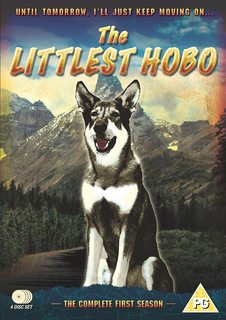 This CTV series which ran in the early 80s, follows a German Shepherd as he goes from town to town helping people with their esoteric problems. Without fail "Hobo" earns the love of the people whose lives he touches, but in every episode that I can remember seeing, he always ends the show by heading off on his own.

Within the television series or any related works that may have followed, did Hobo ever find a home where he could settle down?

According to The Littlest Hobo on Wikipedia:

All three productions revolved around a stray German Shepherd, the titular Hobo, who wanders from town to town, helping people in need. Although the concept (of a dog saving the day) was perhaps similar to that of Lassie, the Littlest Hobo's destiny was to befriend those who apparently needed help, portrayed by well known actors in celebrity guest appearance roles. Despite the attempts of the many people whom he helped to adopt him, he appeared to prefer to be on his own, and would head off by himself at the end of each episode.

Never actually named on-screen, the dog is often referred to by the name Hobo or by the names given by temporary human companions. Hobo's background is also unexplained on-screen. His origins, motivation and ultimate destination are also never explained.

So, I'm taking it that Wikipedia knows better than you do (it was 3 separate prodcution runs) or me (had never heard of it before today) & the ultimate destinaion, let alone 'home', are never mentioned.

Not the answer you're looking for? Browse other questions tagged plot-explanation ending the-littlest-hobo .

3
How did Happy get holes in her clothes?
1
Did Chapman ever find a cigarette carrying roach?
13
Did the creators of Seinfeld ever have an alternate finale in their mind for the show?
12
How did Chigurh find the hotel he was staying at?
1
How did they manage the return home?
4
Did the McCallisters bother to call home?
2
Did Mork and Mindy’s family ever go back to modern times?
3
Why didn’t Sam Beckett ever make it home?
10
Was there ever a car coming for Jackson?
41
How do I get a happy ending in Bandersnatch?