What is the significance of the three Beggars?

In the movie Antichrist, what is the significance of The Three Beggars. I know that the three beggars referred in the movie are the crow, the deer and the fox. 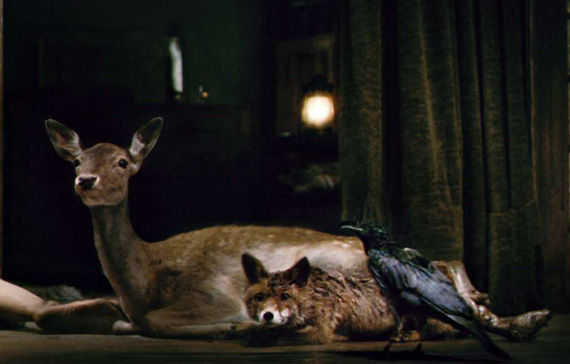 What is their significance in the plot? As per the heroine's words "when the three beggars arrive someone must die."

What does it mean? Is this some kind of witchcraft or what? Is there any explanation on this?

I have read so many analyses of this movie, and I am not sure there is a single answer to any question anyone can ask about it. People who hate it and are repulsed by it are still moved by it, because it is so emotional and there is no way to understand it or put it into a safe context.

Here's a sampling of the meaning of the three beggars from different reviewers:

Lars von Trier has done many interviews about the film, which was written in the depths of depression and served as his means to survival, forcing him to get out of bed to write ten pages each day. In one interview he says:

"Truthfully, I can only say I was driven to make the film, that these images came to me and I did not question them. My only defence is: 'Forgive me, for I know not what I do.'" This precipitates a bout of giggling. "I am really the wrong person to ask what the film means or why it is as it is," he says finally, "It is a bit like asking the chicken about the chicken soup."

When asked about where the fox in particular came from, he says:

"From my shamanic journeys," he replies, without batting an eyelid. "All these animals come from a practice I did 10 years ago. It's a Brazilian technique where you enter a trance through this very powerful drumbeat. There are no drugs involved so it is very safe but very powerful. It's not really that difficult to enter the parallel world."

The beggars, like everything in the film, may be symbols, but they are symbols of things deep within the psyche of a man who is not analyzing them, merely reporting them and sharing them in his art.

Not the answer you're looking for? Browse other questions tagged plot-explanation antichrist .