What is the story behind the "come fly with me gatinha" memory?

This memory appears twice in the film, once for Riley's mother and in the end, for Riley's teacher when she was craving for summer. The image of the memory for reference: 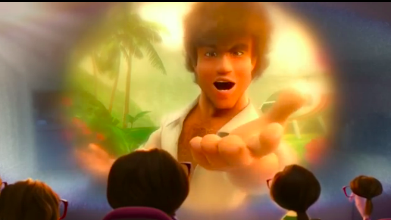 So, was this supposed to be a reference to any character from a previous (or upcoming) pixar movie or any other animated movie?

Or does this memory have a story behind it? Or some canon explanation from the directors?

The wiki isn't really clear on it. It claims that it was supposed to be a memory of Riley's mother when that guy have proposed her. If that is right, then why does the teacher have the same exact memory?

This memory was referencing an earlier joke, where Riley's mother was angry at her husband when he failed to pay attention to Riley's problems:

Mother's emotions: He's making that stupid face again. I could strangle him right now. Signal him again.
Father: So, Riley, how was school?
Mother's emotions: You got to be kidding me! Seriously? For this we gave up that Brazilian helicopter pilot?

So he's apparently just an old acquaintance of Riley's mother, that she gave up for Riley's father and that she still tends to escape to in her fantasy whenever she gets upset at her husband.

Now why does the teacher remember him too? Well, first of all, this occurs in a sequence of jokes playing with the whole "look inside the head" notion of the film and driving it ad absurdum. So this is first and foremost just a recall to a previous joke in order to make you laugh.

But in fact, the fact that she sees the exact same guy has another layer of joke on top of it. It probably is the exact same Brazilian pilot and the teacher knew him too. This implies that this guy wasn't as much of a romantic person as Riley's mother (and teacher) might think and probably said the exact same line to quite a bunch of different women.

Not the answer you're looking for? Browse other questions tagged plot-explanation inside-out .

16
Reference for 'headlight eyes' in Cars 2?
9
How can Jacoby be with Lana and Ben at the same time?
7
Why does President Snow want Katniss to keep on acting the love affair?
17
What is the deal with Elle's and Budd's accents?
7
Inside Out: what is "non-objective fragmentation"?
5
What was the reason for Freddy's outburst?
5
Does Leonard really have memories before the incident?
2
Why did the Green Lanterns reject Guy Gardner in the selection process of Justice League?
7
Explantion for the ending of I am Mother