Why is Mr. Wonka's office appointed with half of everything?

In Willy Wonka and the Chocolate Factory (1971), everything in Wonka's office is cut in half: half a desk, half a sink, half a safe, half a bust, etc.

Because he's a nutter.

That's pretty much all there is to it. It was a very simple and obvious way of bringing out his whimsicality and eccentricity visually.

The director, Mel Stuart, answered this in his book Pure Imagination: The Making of Willy Wonka and the Chocolate Factory, where he said:

the reason everything in Willy's office is cut in half was because Stuart couldn't bear the thought of - after having gone through all the whimsical and creative rooms in the factory - ending the movie in an ordinary office. Everything was cut in half to make the room look more Wonka-esque.

Thinking about it a little more deeply, it could also be a reference to the halved pieces of crockery found in the 1951 Disney adaptation of Alice in Wonderland: 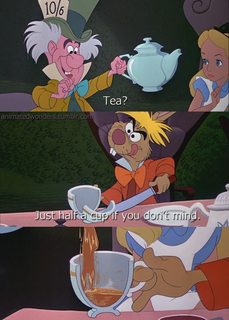 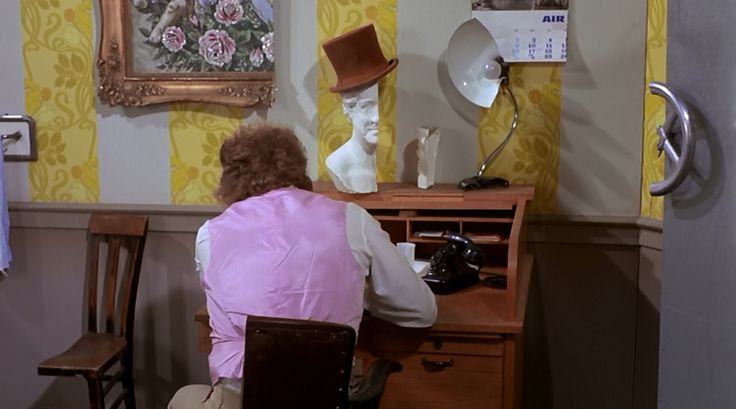 Both Alice in Wonderland, and Charlie in the Chocolate Factory, are examples of the trope of an ordinary child whisked into a fantastic world and shown incredible things. Perhaps this is the film's way of tipping the Wonka top hat to an older film adaptation of an older story with a similar theme.

(I in turn should tip my top hat to Jeff at the Sci-Fi & Fantasy SE for his answer to a similar question there.)

Oh and just for fun, from IMDb's trivia page:

During the construction of Willy's office, in which everything is cut in half, one of the prop men accidentally sawed in half a non-prop coffee pot that someone had put in the work area. Only when coffee began spilling out did he realize his mistake.

Not the answer you're looking for? Browse other questions tagged props willy-wonka-and-chocolate-factory .