Why can Arya still use the faces?

Per my understanding, once Arya Stark killed the Waif in Game of Thrones S06E08 ("No One") she came to Jaqen H'ghar and finally admits that,

A girl is Arya Stark of Winterfell. And I'm going home.

So she seems to renounce any ties with the Faceless Men and to have found her real self back again, after a time of confusion about herself and her legacy, to Jaqen's apparent satisfaction.

I thought this magic is only reserved to the Faceless Men who truly became No One. Arya, though, is someone and is done with the Many-Faced God, yet she still can use the faces at her apparent disposal (without even being near the "face storage" in Braavos). Why/how?

This might be based on a lack of understanding from my side about how this "face magic" actually works. Is it just an accquired skill that you can then use however you want (maybe only requiring some "willing" corpse to provide its face)? Or is it tied to other requirements that Arya already fulfills, albeit not belonging to the Many-Faced God anymore? Or does she maybe even still belong to the Faceless Men somehow? Or is she using the faces "illegaly" as she did before?

In the show, Jaqen still uses his name, which hints at the fact that a name is "earned". The No One ordeal is, as @KutuluMike said, a test. By the end when Arya kills and scalps Waif, Jaqen tests her again by saying "So a girl truly has become no one?" Arya passes the test by saying "A girl is Arya Stark from Winterfell." It was at that moment Jaqen smiled quite knowingly and thus Arya had earned her name from the Many-Faced God and became a Faceless Man. The season finale episode only confirms her initiation into the Guild of Assassins by the fact she is still able to use the magic given only to Faceless Men by the Many-Faced God.

In "Beyond the Wall" (Game of Thrones, S07E06), Sansa discovers that Arya has a bag full of faces. 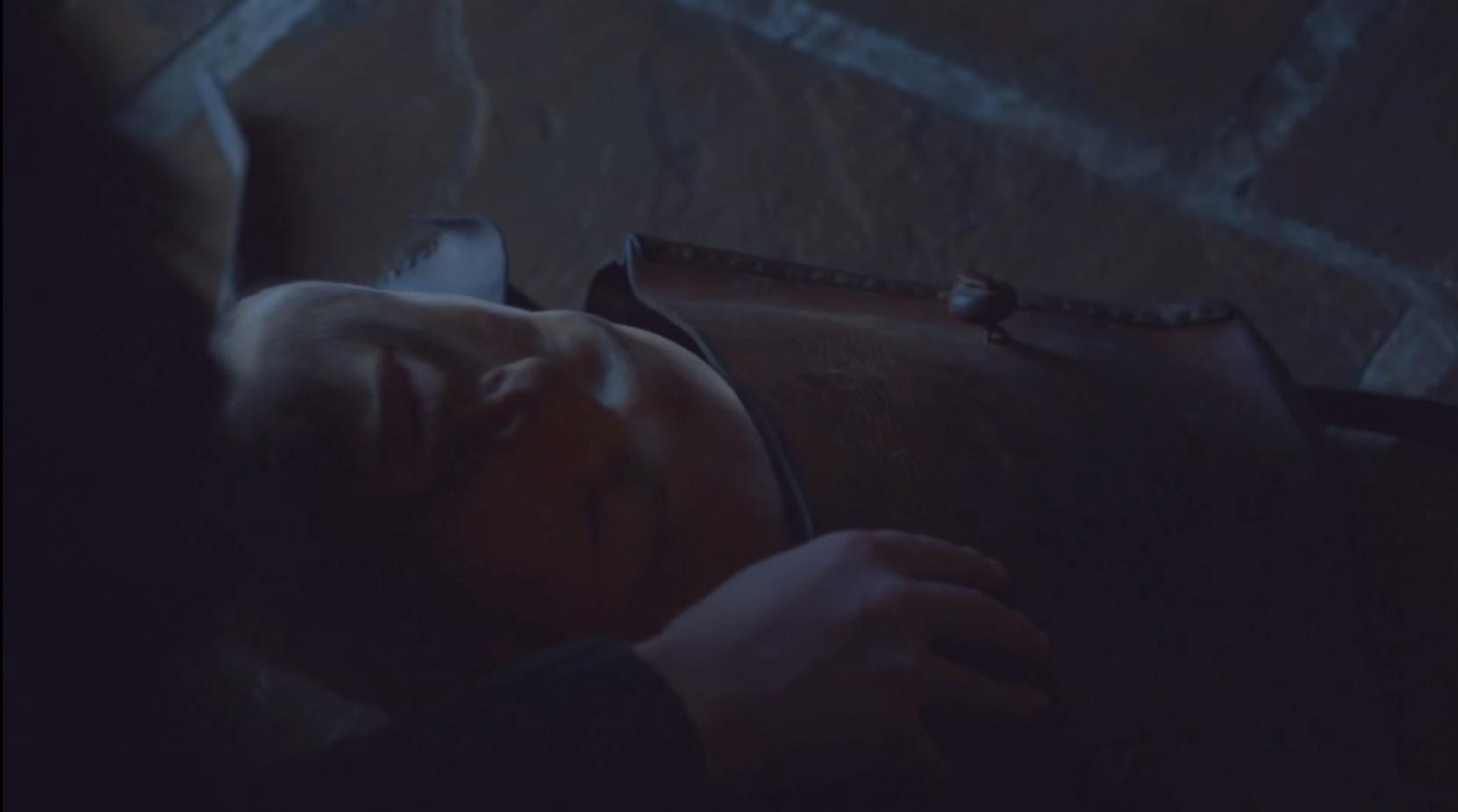 SANSA: What are these?

SANSA: Where did you get them?

ARYA: In Bravos, while I was training to be a faceless man.
—"Death Is the Enemy" (Game of Thrones, S07E06)

This tells us a few things:

From this, we can infer that the girl's face she wore during that scene in "The Winds of Winter" (Game of Thrones, S06E10) was one she took from the Hall of Faces and carried with her in her bag. A smart move as innocent looking girls can be quite inconspicuous, and there is precedent for this happening (if you recall Arya using a girl's face to infiltrate the brothel, in order to kill Meryn Trant). The alternative is that she killed someone off-screen, but it seems uncharacteristic of Arya to kill someone innocent, so we'd have to assume she killed someone who Arya thought deserved to die, and that the show decided to cut that - the aforementioned "she took a face from the Hall of Faces and carried it with her in her bag to Westeros" seems more reasonable.

Even if magic is involved, magic on this show comes from the gods, not the magician. Arya didn't renounce the Many-Faced God; she only left her position (whatever it was) with the House of Black and White. Also, Syrio told Arya way back in season 1 that there is only one god: the god of death. It may be the same god (since Syrio was from Braavos) in which case Arya's affinity to him (or it) might predate her involvement with the Faceless Men.

If magic is not necessary to wear faces or prepare them for later use, then those are skills like any other skill she learned during her stay. There is no reason for her to forget those skills when she turned in her Black and White membership card.

Jaqen's line about the faces being poison unless you are No One might have been a lie, or might have meant she had to complete her skill-set by fulfilling the requirements to become No One, which apparently she did by adding a face to the hall. Jaqen's line "now you are No One" didn't sound like a question to me, but rather a statement of accomplishment, suggesting that she prepared that face correctly. So now she is fully qualified to wear faces without fear of blindness.

Of course, Arya doesn't have access to the actual hall anymore. So unless she turned back and asked Jaqen to loan her a few, any face we see her wear after that point is one she, uh, acquired and prepared herself.

Update: Season 7 provided evidence both for and against the above. In s7e1, Arya impersonates Walder Frey, demonstrating that whatever surgery, magic incantation, or religious ritual is involved, Arya can do it in the field; access to the House of Black and White is not necessary. Unless you want to believe she took a quick trip back to Braavos with a corpse or severed head. In s7e6 we see that the faces are transportable, which was kind of implied but not previously shown, but then Arya describes them to Sansa as her faces from Braavos. This suggests that Arya really did turn back and ask Jaqen for a few. I mentioned that possibility in my original answer, but I think it more likely Arya was dissembling, given the storyline.

In plain and clear text the many-faced God guild is just a group of people that worship a specific God and have been trained to use dead people faces. If it involves magic (or God intervention) or not it's not really clear but Arya was trained during a long time and acquired the skills to use the faces. Not only the faces but also the ability to follow and spy, fight better and move silently. Even renouncing the guild will not make her lose the ability to use the faces or any other.

If she can only use faces of dead men that she carries like a mask then I don't think she's truly no one. Jaquen never carried any masks and he could 'shed' his face to aquire another. I think she's partially a 'no one' so that the faces aren't poison to her and as long as she takes lives that are are rightfully 'owed' to the many faced god.

Jaquen is also shown immortal or at least he doesn't die when he drinks the poison because he is 'truly no one'. Although one thing that counters his not dying is the fear of death that Jaquen shows back in season 2 when arya saved his cart-prison from being burned down and saved his life...so he can die...?

10
Why is Arya Stark allowed to do this in the season 6 finale of Game of Thrones?

18
Did Arya really see that the Thin Man was a wrongdoer?
11
If "No One" uses a face from the Hall of Faces to become someone then how did he do this
29
Who is the third man that Sandor Clegane is referring to?
19
Is the Waif wearing Arya's face?
13
Do the Faceless Men take more than just a face?
4
Why didn't Arya use the powers of The Faceless Men to get past the dead in the library?