Is there a word or phrase for when the movie tricks you for a moment like this?

I know I've noticed this effect many times but I can only think of the most recent example: At the end of a scene, someone (bad) is locked out via mechanical door, and is pressuring the people inside to let him in. As the scene is closing, and we're about to switch to a different setting, a mechanical sounds is played before the current scene is cut, but it's the audio for the next scene, making it feel like that door is opening ("Oh no"), but it's not really. You're just tricked for a moment.

Is there a word or phrase for this technique? Is this just a nuance artistic feature used by a few select directors, or is this a well known, commonly used technique?

Not sure if there is a term of art in Cinematography to refer to the suspense aspect, but the editing technique is a film transition called an L-Cut.

An L Cut is an editing technique that results in a cut occurring at a different time for audio than for video. For example, we may hear characters' voices a few seconds before we see them on film. In order to achieve this effect, the editor had to make an L-shaped cut on the filmstrip itself. Even today with the advent of computerized non-linear editing systems, the digital representation of the film in the program still takes on this L-shaped appearance

The L shape being that audio on a film-stripe leads the video by a few millimeters for syncing purposes. The digital editing version still looks like an L for separate reasons. 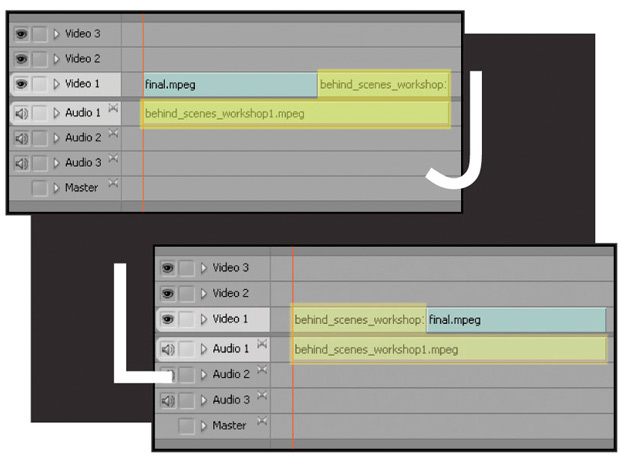 These cuts are used all the time in same scene dialog, when switching or not switching between the cameras facing the different actors, but is often used for transitioning between different scenes as well.

The stark jump between scenes would be considered a Contrast Cut, like jumping from an action scene to a dialog.

Star Wars does this all the time, but with a wipe or iris fade for the video. The most common one is when you start hearing a Tie Fighter before the wipe starts/completes.

Here's a good video analysis of the various wipes and cuts in Star Wars.

As noted in the other good answer, a screenwriter would term this same trick a Pre/Post lap (as in overlap). But after searching, there doesn't seem to be any specific term for this trick in suspense. It's a general technique used for all genres or for multiple reasons. It's not used solely for scaring the audience.

The screenwriting term for what you describe is a "prelap".

Prelap is a screenwriting term that means the dialogue from the next scene precedes the cut, and the beginning of the dialogue is heard in the outgoing scene

Prelaps can be of sound or dialogue, or anything non-visual, since a visual would indicate a direct cut to a new scene.

Because the viewer will naturally try to connect what they are seeing with what they are hearing, it is often used to portray a logical connection between the two scenes.

This is also sometimes employed in comics by including speech from one scene as narration boxes over the preceding scene.

The reverse of this is the post-lap.

Example: Primer has a scene in which an ice machine is activated on a refrigerator, and a noise is heard. Said noise turns out to be construction equipment from the next scene, where the protagonists are trying to build a device in the garage.

Not the answer you're looking for? Browse other questions tagged terminology editing .

3
What is the name for this filming technique?

2
Is there a trope for people that are quite harmless on their own but when paired with 'this guy' they could make a chaos towards their surroundings?
5
Is there a term for the prologue story present in the opening of a film?
26
Is there a name for this storytelling technique?
9
Is there any term for this when a movie doesn't end as its plot suggests?
6
Is there a term meaning "a character whom you know can't be a minor character because of the actor playing them?"
10
Is there an over-arcing term for this style of movie?
14
How do you refer to key objects like the Death Star from Star Wars?