How did the word “Bazinga” originate?

Sheldon from The Big Bang Theory uses the word "Bazinga" whenever he wins over a conversation or pulls off sarcasm successfully.

So, is there any canon explanation about how the word originated in the show? Was it the director's idea or was it adopted from somewhere?

It's a real obscure word that Sheldon's actor overheard and decided it was funny to use. From an interview with AOL:

"One of the writers, he used to say it, apparently in the writers' room. That's the tale I've heard. But I remember it wasn't in a script. It was one of those moments where we'd work on a scene and then you'd go and take notes from the producers and writers. If I'm correct, it was inserted right before a taping basically. It was like 'That would work in here. What if he said 'bazinga' after that?'" He admitted the audience may not have known what it meant at first, but it caught on for a familiar reason. "The writers liked it but they knew what it meant. But I knew what it meant the moment they said it. It's like 'gotcha", you know, it's just in that energy. There's just something about it. I like it because it's not plain English in a lot of ways and that's very handy."

The BBT wiki points out it was used in an old X-Files episode:

In the X-Files episode "Hollywood A.D.," which aired April 30, 2000, character "Chuck Burkes," played by actor Bill Dow, utters the word "bazinga," though it is spelled in the captions as "buzzinga."

Burkes: "Who made this?"
Scully: "We're not sure. Either a forger by the name of Micah Hoffman, or uh, someone else in the vicinity of Jesus Christ."
Burkes: "Buzzinga."

Besides the answer by CDE and if you're looking for the canon answer, it is shown in Young Sheldon S02E10 A Stunted Childhood and a Can of Fancy Mixed Nuts that Sheldon comes across this word in a comic book store.

When he tries to develop a sense of humor, he goes to a comic book store which leads him to orchestrate practical where he sees this phrase

If it's funny, it's a Bazinga.

That's where Sheldon comes across this word. He uses this word when he plays jokes his family members. 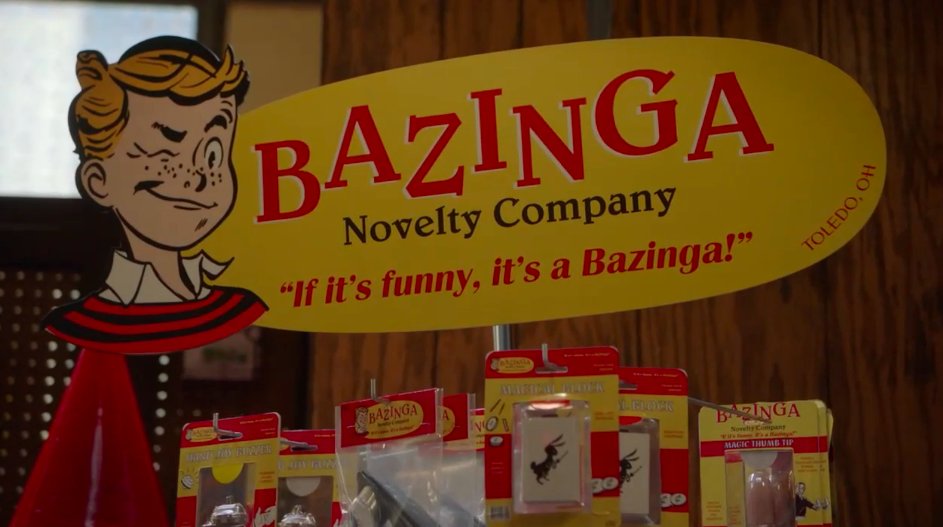 From Cinemablend (emphasis mine),

That journey took him to a comic book store, where he purchased several practical jokes. He ended up playing many of them on his family. The practical jokes Sheldon bought were made by the Bazinga Novelty Company. The company's name undoubtedly plays a role, but that is not where the origin of "bazinga!" entirely lies.

The company's tagline holds the key. Bazinga Novelty Company's slogan was "If it's funny, it's a Bazinga!" and that is how Sheldon's catchphrase was born.

18
Is the mystery of Howard's father's letter solved?
1
What would be the MBTI personality type of Sheldon Cooper?
9
Can a TV sitcom like TBBT be pulled off the air prematurely?
52
Does Sheldon Cooper have Asperger's Syndrome?
4
Why does Sheldon not stop Leonard from sitting in his spot on the couch?
32
How do you combine the elements in Sheldon's T-shirt?
2
First Big Bang Theory episode with none of the guys in pre-credit sequence
2
Where does Sheldon hide the Golf Ball in TBBT S09E19?
31
How do TV shows go about getting “unbranded” cars?
5
What's the exact problem with Raj?