What was Edna Harper's military rank on Everwood?

In the series Everwood, the character Edna Harper did at least two tours of duty in the military. Did any episode reveal what her rank was at the time of her leaving the military?

No, they never did. They also never showed her in uniform, or in a flashback in the war, so we don't have her uniform insignias or emblems to go by.

At minimum, as a army nurse, that places her in the staff corps of the Army Nurse Corps. During the Vietnam War, this would make her an officer with equal rank of normal officers, but with limited ability to pull rank. She would not be considered enlisted. Nurses in the ANC typically start at 2nd Lieutenant (O-1). The Nurse Corps during the war allowed for plenty of promotions, even to black/minority nurses during a still highly segregated (read: racist) military. From the words of a black ANC Nurse:

Another Army nurse who volunteered to serve in Vietnam was MAJ Marie L. Rodgers, who received the Bronze Star from President Johnson in a White House ceremony in December 1967. MAJ Rodgers, a 15-year veteran, rendered distinguished service in connection with group operations against a hostile force in Vietnam from October 1966 to September 1967. She was the operating room supervisor in the 24th Evacuation Hospital in Long Binh .39 In her words “I got the Bronze Star because of how smooth[ly] my unit ran.” Rodgers volunteered to go to Vietnam because she knew she was a good operating room nurse and wanted to have the opportunity to contribute her skills where they were most needed. She also wanted to challenge herself. The hospital at Long Binh was very busy; operating room personnel routinely handled all types of wounds, including head and face wounds. Rodgers noticed little racial prejudice in Vietnam. She said, “The Army system of promotion really helped. In other situations, as a black nurse, I wouldn’t have gotten the kind of jobs I had. In the Army, they always had to give you the job you trained for, and with that, the rank.”

Edna has been stated as having two tours in Vietnam, and Highly Decorated. Vietnam nurses faced actual danger from direct enemy fire, and often risked actual fires, which increased the likely hood of promotions and decorations.

I have no doubt she quickly exceeded 2nd Lt. rank based on her actions/statements/demeanor, but we have no actual evidence of her Rank. It's safe to assume Major, a typical career nurse rank. 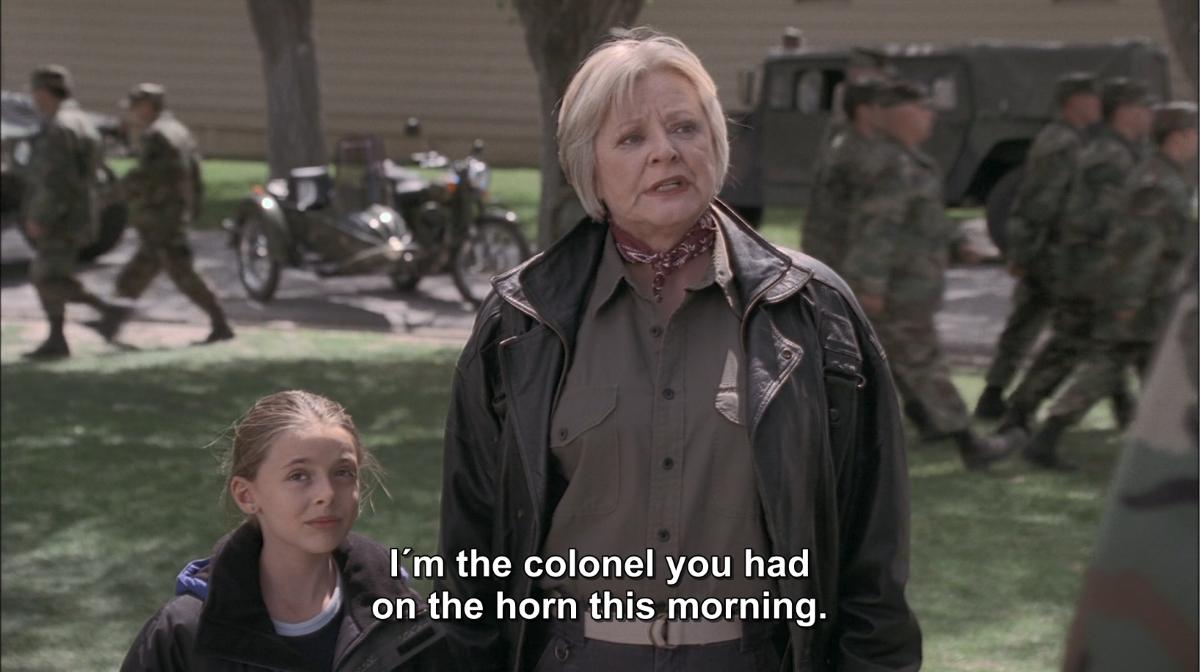 Note that the subtitles in the screenshot are actually incomplete. What she actually says is:

I'm the retired Lt. Col. you had on the horn this morning.

Not the answer you're looking for? Browse other questions tagged character everwood .

2
Would the plot have worked without Salino?
3
Who was the Escape Artist?
3
Was Assistant DA Serena Southerlyn known to be gay before her exit on the show?
4
Was there a purpose to Margaret Allison Hart being introduced in Season 7?
5
What Object Did Marilyn Take and What Does it Mean?
3
Why Wendy gets angry and leaves?
14
Did Edna already know about Jack-Jack's powers?
6
How did Reese's father die?