How are talking scenes in movies/shows filmed? [duplicate]

So, I've been curious about this (since taking a class dealing with filming and editing I've been taking more notice of good/bad shots and just overall more curious about film techniques) when two or more people in a show or something are talking, how do they film that?

I've tried to piece it together myself. My idea is that there is only one camera and the two characters go through the whole conversation while the camera is only showing one person and the back of one person, then the camera switches places and does the same with the other character.

Then from there, the audio would be edited in from the character who is not facing the camera. That would explain why sometimes the characters actions don't always match up, right?

Example one: I was watching a show and three ladies were having a conversation. Lady #1 said her line and lifted her wine glass to her lips. The camera then pointed to the two other ladies but lady #1 had already put her wine glass down, so that means it was filmed more than once right?

And here's also an example of them editing in the audio. I was watching another show and there were two characters talking. The camera was positioned so you could mainly see character #1s reaction while character #2 talked.

This wasn't the exact scene that I was Referring to but it's similar. The girl is character 1 and the boy is #2. In the scene, the camera was just like this, except the girl was just listening to the boy talk. The thing is, his mouth was moving but was not syncing up to what he was saying. So what's up with that? 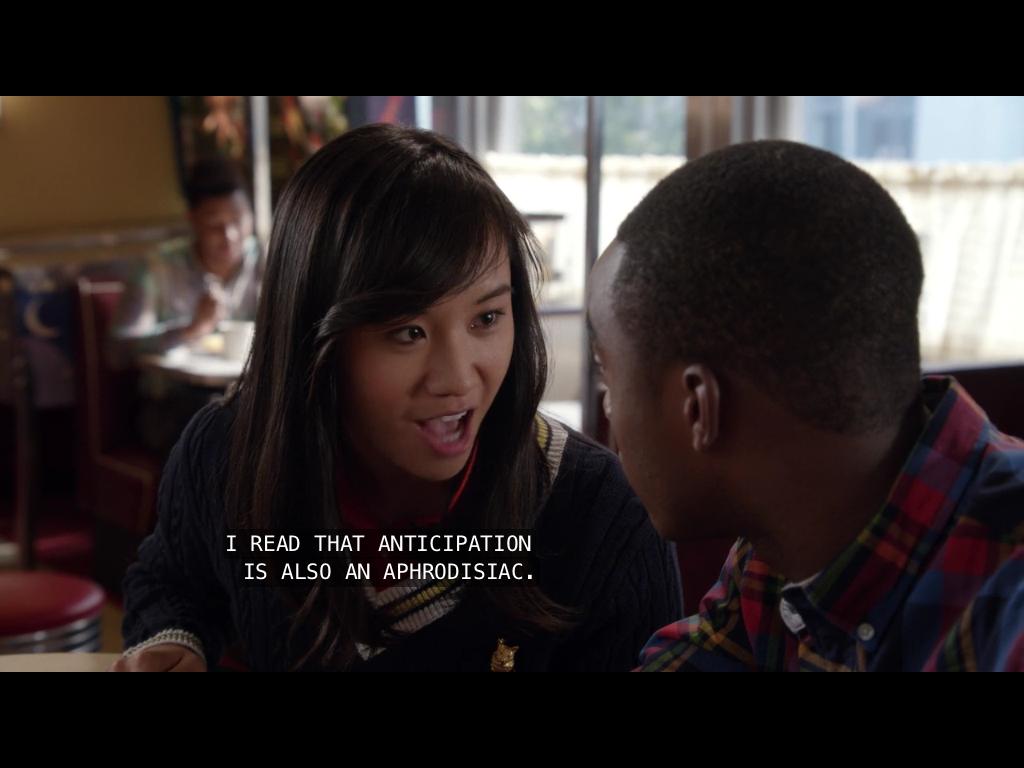 If I confused you I'm sorry, I tried to word this as best as I could. If your understand me it'd be great to hear back from someone before I go crazy lol

There are many ways to film dialogue scenes. In reality, what you see on film (unless there are no cuts at all) is a compilation of potentially dozens of takes of on-set film and audio recording, possibly coupled with digital recording sessions done after the fact (the way they record audio for animated films).

On a single camera shoot, for dialogue-centric scenes you are correct. Generally, the director and cinematographer will set up the camera for one shot and all or part of the scene will be recorded both with video and audio and they will likely run through the scene anywhere from 3-100 times depending on the director. Audio is carefully recorded for both (or all) characters, not only the one on camera at the time. This is generally done with a combination of lavaliere microphones (body mics) and a boom pole.

After the director is happy with one or more of the takes, the camera will be repositioned for another setup and the process will repeat. This will be repeated until the entire scene is completed and may be anything from one shot to five or more depending on the number of people in the scene and how complex it is.

On a multi-camera shoot (more common with TV), it's often possible to record two or more shots at the same time, though this can reduce the quality of the frame you are able to get as you have to "shoot around" the other camera/s. This is, however, a great way to get your dialogue to match perfectly, provided the audio is good and both actors do good performances in the same take.

As for order of shooting, generally directors tend to start wide and move in from there. The beginning of the scene will often be recorded in a wide shot to set up the location and as the conversation intensifies, will generally get closer to the people.

For the scene at the counter in the cafe, possible shot frames include:

The errors you've noted (as with the wine glass) are considered "continuity errors". There's even a crew member whose entire job is to help reduce these issues and actors are trained to do their best to precisely repeat their actions in a way that makes them less likely... unfortunately, this isn't always possible. Editors work to minimize the errors that end up in the finished product but if there are only a few takes that are considered good enough to use, you're stuck with the errors.

When sound is edited, what dialogue track is used depends on several factors:

If the quality of the on-set sound recording is poor - this is usually due to being in a noisy location or having low-quality equipment - it may be necessary to do studio recording of audio after the fact. This may also be necessary if it's decided that the dialogue needs to be changed. Recording in a studio gets very good audio but it can be challenging to line up the new recording with the recording of the video - most often made challenging when changing dialogue or due to not having the same emotion as when on set. Actors get a lot of emotional queues from the each other and from the set and the director. When in a sound booth, it can feel somewhat stale so it can be difficult for them to put themselves in the same frame of mind they were in when originally filming the scene.

In the case of the dialogue not matching up with the secondary person in frame, this isn't particularly uncommon - if the delivery of a line was much better in another take and the character is mostly off-screen or if the editor plans to switch between shots in the middle of a line, it's considered a minor issue for their lip movements to not match perfectly. Yes, you want to do your best, as with the continuity issue mentioned above, but it's not always possible and (in general) the average viewer won't notice it unless it's really bad.

One of the first warnings they gave me when I started taking editing classes was "be prepared to notice annoying stuff that never bothered you before"... continuity issues and lip synch are things that editors are trained to look for so they become very obvious to them. The reason they're considered "minor issues" is that they come very low on the hierarchy of what is necessary for good editing... A famous editor, Walter Murch's created his Rule of Six - essentially his preferred/recommendation for what to emphasize in editing. He wants to follow all six rules in his editing but if he can't have everything, start ignoring the rules at the bottom of the list first:

The ideal cut (for me) is one that satisfies all the following six criteria at once:

This is from his book In the Blink of an Eye. Things like continuity and lip synch fall into rule 6.

Not the answer you're looking for? Browse other questions tagged dialogue film-techniques .

39
How is dialog between two people filmed?

24
How are underwater scenes in movies filmed?
39
How is dialog between two people filmed?
9
How are death and autopsy scenes filmed?
3
Camera movement in final scene of 'Into The Wild'
13
What are the methods of including a character's thoughts in an audiovisual medium?
8
How to go about a dialogue scene when it comes to the actors speaking?
1
What is the name of the effect for showing past days in movies?
10
In "Don't Just Stand There" (1968), why was it a compliment to ask a girl if she was "Pamela McCarthy"?
89
Alice growing effect in 1972 "Alice's Adventures in Wonderland" - how was it done? It's not green screen