Is a certain level of participation expected from the audience when viewing The Rocky Horror Picture Show?

As established, a viewing of The Rocky Horror Picture Show involves a lot audience particip... (say it! say it! constip...) pation.

This includes callbacks, props, a shadow cast, and the audience dressing up as characters from the show.

Is it frowned upon to not have brought any props or to have come in ordinary clothes?

The first time I saw RHPS in the theater, I'd already watched it at home, seen a stage production, and owned the soundtrack for a while, so I was more able to participate than the average "V"... That being said, on my first visit, I was not alone. Between people making their first sojourn out of base curiosity or being dragged along with their friends, there were easily 20 or so first timers out of the 80 or so attendees at a regular weekly Saturday Midnight showing (in Austin, TX).

I mention this because it shows you that not everyone who shows up at these screenings has ever been before. Even the people dragged along by friends were dressed in normal clothes.

So, as to your questions:

No, there's no requirement that you dress up or bring props or sing along. In fact, many of these local screenings will sell prop bags (or even include them in the price of admission) so that everyone who wants to can play along. This is also a great way of restricting which props are brought in as some theaters ban certain props.

In fact, even people who are regulars will often go in "plain clothes". Yes, usually some audience members are dressed up but it wouldn't be out of place for only the cast members to be in true "costume".

In fact, the official guide to being a RHPS Virgin reads:

First, the only thing you really need to bring your first time out in order to have fun is a sense of humor, and money for admission (and food at the nearest 24-hour diner afterwards.) Of course, being surrounded by 10-15 of your friends is also a good thing. You should dress in whatever makes YOU feel comfortable, but also does not violate any local standards (this usually means nudity is out.) Speaking of violating laws and norms of society, it is usually best to go to RHPS sober the first time. Not only will you be more in-tune to pick up all the clever things going on around you, some theaters will not admit those people who look drunk - what theater manager wants to clean up after a drunk at 2:30 a.m.?

If you really want to bring props, check with your local theater and ask what props are not allowed. The safest ones to bring are rice (banned at some, but not most theaters), toast (unbuttered), toilet paper and a deck of cards. A newspaper may help keep you from getting wet, but water is banned at many theaters. Watch everyone else to figure out when to throw these items. A prop list is available on this website.

So, for props, my local RHPS group notes this on their site:

Prop bags are sold when available by the cast for $3.00 each (or two for $5.00). Prop bags generally include newspaper, glowstick, rubber glove, noisemaker, toilet paper, party hat, playing cards, Mardi Gras beads, and a condom.

And going back to the newbies guide, they point out that there's one easy callback line to remember:

Oh, and if you need to know one AP line, there is one that is almost universal to every theater, that you can use multiple times. Whenever you hear the name "Brad Majors", yell "ASSHOLE", okay? An important note here: AP is NOT fixed from theater to theater and night to night. If you feel an new line coming on, YELL IT! A big part of keeping the show fresh is creating new lines with topical humor.

Another fun note, if you want to "prep" for a screening, at least some versions of the DVD/BluRay include an audio track with the audience participation lines and a "subtitle" track that tells you when to do stuff.

After all that, though... remember that the number one rule is to have fun, so if that's all you do, you're doing plenty!

TL;DR: No, you're absolutely not expected or required to do, bring, or wear anything at a screening of The Rocky Horror Picture Show

I don't see any way to answer this without reference to personal experience, so here goes.

Not a big deal. I've probably brought props about half of the times I've seen RHPS in the theater. Sometimes, the group in charge will have some extras for people who couldn't/didn't bring anything, and most regulars would be happy to share what they have if you ask. But if you don't bring anything and don't want to borrow/share anyone else's supply, it isn't a big deal. No one will mind at all. If I had to give a ballpark estimate, I'd say that in my experience, far less than half the audience actually brings props to most screenings. 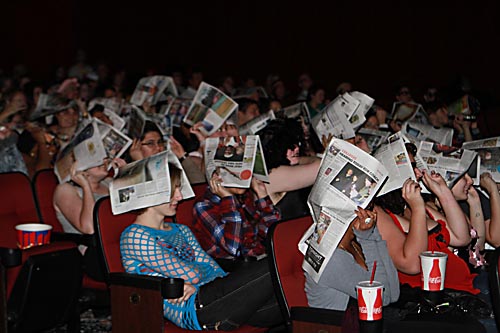 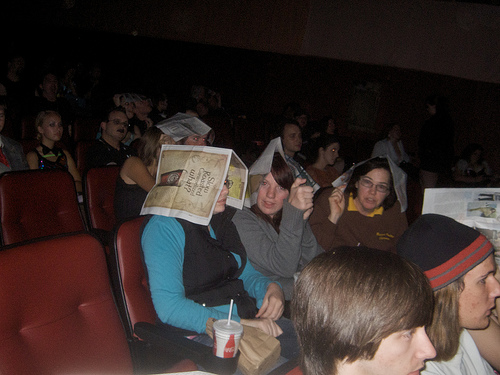 These photos, taken in the theater during the song (There's a Light) Over at the Frankenstein Place reflect my experience pretty well. On screen, Janet (Susan Sarandon) is using a newspaper to keep the rain off her head, and it has become customary for the audience to follow suit. However, you can clearly see that most of the audience isn't putting newspapers on their heads.

Again, no biggie. The entire point of the RHPS audience participation phenomenon is to express yourself however you wish. That might mean dressing up as Frank N. Furter, or dressing up as Batman, or wearing your street clothes. It's up to you. No one will notice - let alone care - if you're there in jeans and a t-shirt. If you have an amazing Columbia costume or what have you, you might get some compliments, but if you're just dressed normally, you'll almost certainly be in the majority. 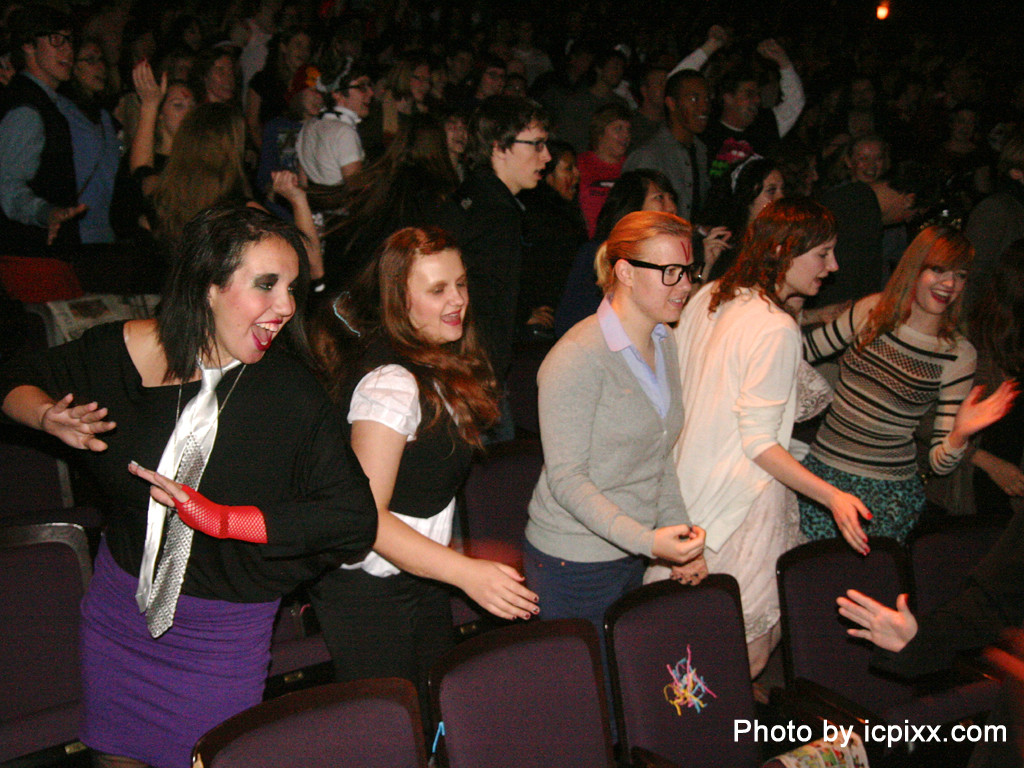 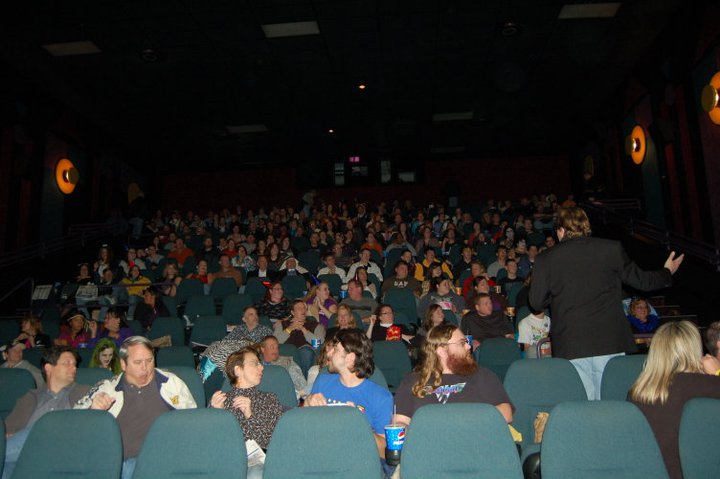 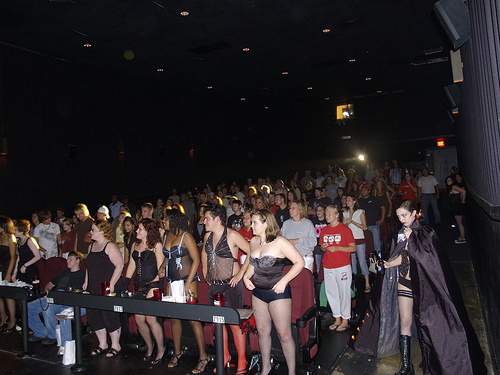 Again, these photos of audiences at RHPS screenings are a reasonable reflection of what I've seen in the theaters I've been to. A small number of fans in full Transylvanian regalia (usually sitting in the front rows), one or two folks in costumes with no apparent connection to RHPS, and a large majority wearing normal street clothes.

Not engaging in call-backs (i.e., shouting at the screen):

None of the things I've covered in this answer so far are big deals, but this one is the least big deal of all.

For starters, you're going to be in a dark movie theater, with a loud movie playing, and most of the audience will be screaming for most of the movie; their visual attention will be focused on the screen and the shadowcast below the screen. As such, it will be difficult for anyone to even notice that you're not shouting along with them. Just like every other time people go to a movie, they're watching the movie, not staring at the other people in the theater.

Furthermore, everyone was a RHPS virgin once. If you've never been to a screening, you don't know what to shout or when to shout it. You probably won't get a good grasp of the call-backs until your third or fourth visit. So there will always be at least a few people in the crowd who are just taking it all in, not participating in the madness.

This is a total non-issue. The shadowcast is determined long before the night of the screening, and at most theaters, there is a set group of people who serve as the shadowcast on a revolving basis. I've never seen the cast ask for volunteers at a screening.

This is the one aspect of audience participation that, if you choose to abstain from, you might catch some flack. At my first screening, I was a shy 12-year-old who was embarrassed to dance in front of strangers. The people around me realized this and encouraged me, and I quickly joined in - to much applause and cheering from the people near me.

Another time, I brought a date to RHPS. She had no idea what the movie was, or what would happen in the theater, and she refused to participate in any way. No one noticed that she was wearing regular clothes, not doing call-backs, not using props, etc, but when the Time Warp began, the people around us did react, and more than one person said stuff like "Get up and dance, dammit!", etc.

Even so, nothing will happen to you if you refuse to dance, but it may attract some attention from your immediate neighbors, and even a comment or two. Aside from these two instances, I've never noticed anyone not dancing the Time Warp; if you're shy or embarrassed to join in, no one will force you to do so, but you should try to remember that everyone is doing it, and you won't look any sillier than they do.

How do Virgins know how to do the Time Warp, you ask? Quite simply, because the first time the dance happens, the "Criminologist" narrator and the Transylvanians explain and demonstrate how to do it:

It's just a jump to the left

And then a step to the right! [repeated]

Put your hands on your hips...

And bring your knees in tight.

But it's the pelvic thrust... [backwards and forwards, repeating]

that really drives you insane! [in a circular motion]

None at all, with most audiences. There are often a few people who have never seen RHPS before. It's fine if you haven't. Seeing it for the first time with an engaged audience is a really fun time. Just enjoy the film.

Is it frowned upon to not have brought any props or to have come in ordinary clothes?

No. If you haven't seen it before, you wouldn't know what props/costumes are appropriate. It's fine to go in empty-handed in your regular clothes.

Not the answer you're looking for? Browse other questions tagged the-rocky-horror-picture-show .

27
What happens in a Rocky Horror Picture Show showing and why?

27
What happens in a Rocky Horror Picture Show showing and why?
7
Which characters were at the wedding in Rocky Horror?