How did Alex get the job at a fast food restaraunt with no ID?

In Into the Wild, Alex threw away all of his IDs, burned his Social Security card, and resisted the temptation to try to re-acquire an ID at a later time.

I can understand that he may have been able to be an undocumented worker on a farm, but how did he get the job at McDonalds? Don't they make you fill out all of those forms, have taxes withheld, etc., etc.?

This is supposed to be a true story, so I'm very curious.

The book makes it clear. Chapter 5:

At the time he wrote these words, he was holding down a full-time job, flipping Quarter Pounders at a McDonald’s on the main drag, commuting to work on a bicycle. Outwardly, he was living a surprisingly conventional existence, even going so far as to open a savings account at a local bank.

Curiously, when McCandless applied for the McDonald’s job, he presented himself as Chris McCandless, not as Alex, and gave his employers his real Social Security number. It was an uncharacteristic break from his cover that might easily have alerted his parents to his whereabouts—although the lapse proved to be of no consequence because the private investigator hired by Walt and Billie never caught the slip.

The Assistant Manager and Lori say he was a good worker, and they were basically short staffed.

Lori: "He was reliable, though, a body that showed up every day, so they didn’t dare fire him. They only paid $4.25 (four twenty-five) an hour, and with all the casinos right across the river starting people at $6.25 (six twenty-five), well, it was hard to keep bodies behind the counter.

Considering this is a pre-9/11 rural US with a short staffed fast food joint, I don't expect them to give much issue for a cook to have no ID as long as the information checks out. Not like they had E-Verify for SSA or IRS purposes back then. It's also not required to have or use the actual social security card present for a job (Form I-9 rules).

The script just glossed over it, as it doesn't mention the real social at all.

As R.J. MacReady mentioned in a comment, apparently they made up the parts of the movie where he destroyed his ID's and refused to get new ones.

A local dog musher read about his story, went to the bus, found his backpack, and after keeping it for years and showing it off in interviews he sent a wallet from the backpack with all of these ID's to the family (who requested it after seeing the dog musher show it off in documentary films): 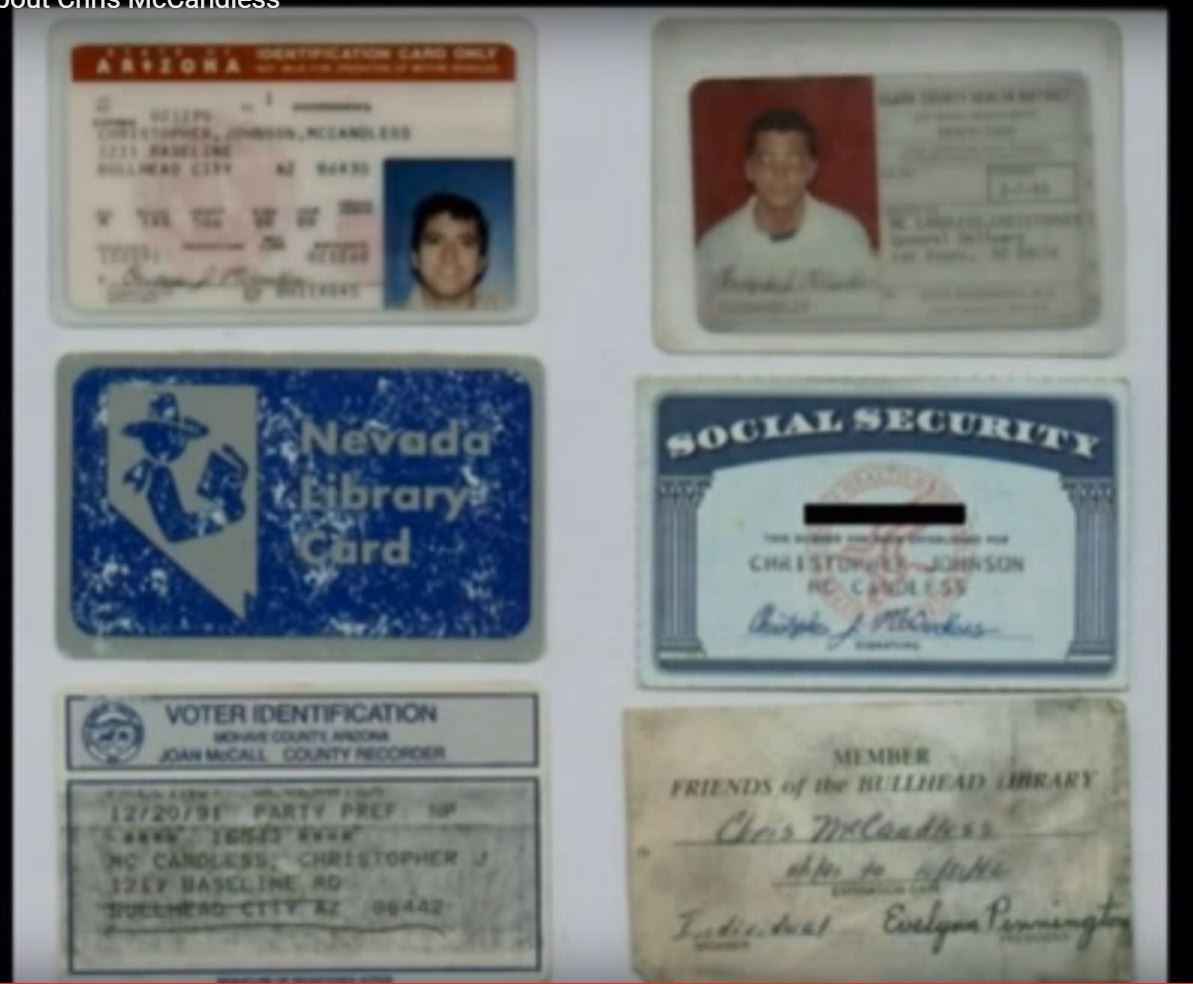 Not the answer you're looking for? Browse other questions tagged plot-explanation into-the-wild .

15
How did Shane and Randall turn so fast?
11
How did Dexter get away with his plan in the airport?
6
How did Louis Bloom get away with what he got away with?
10
Why did the farmer get arrested?
3
How did JB get away with the shooting in the first episode?
15
How did Rose Armitage get away with it?
2
How did George get the antidote?
1
Why did Christopher abandon everything and go wild in “Into the Wild”?